Nowadays we dislike the overwhelming amount of images, for we link this proliferation to the progress of reproducibility. But is the technical predictability the only parameter for this growth? This could be explained more satisfactorily in terms of more uses for photographs. In any case, this is what is suggested by the observation of connected uses.

The first period of the static websites was characterized as a "society of authors 14 ". In contrast, the abilities of symmetric interaction promoted by the Web 2.0 have lead to users describing the activity of on-line publications as a conversation 15 . Studied in detail by Pragmatics or Ethnomethodology, the oral exchange structured by the order of speaking is considered as one of the foundations of sociability. "That is where the child learns to speak, where the stranger socializes by entering a new group (...), where the social relationship is built, where the system of the language is formed and transformed 16 ."

The ordered, symmetrical, open, and cumulative interaction that characterizes instant messaging or on-line exchanges is similar to the egalitarian sociability of conversation. As Jean-Samuel Beuscart, Dominique Cardon, Nicolas Pissard and Christophe Prieur note in their study on Flickr, the integration of the image in this economy represents a remarkable evolution of these features 17 . Rather than having conversations about pictures, they say, the Web has favored having conversations using pictures.

However, the ability of using an image as a message wasn't born with digital devices. For example, this attribute is also offered by an illustrated postcard, which has seen a marked development since the end of the 10th century. If we agree to add the correspondence as a conversational genre, the association of the image allows us to see a primitive state of this creation, following a much slower rhythm. Even if the industrial production requires us to turn to standard ways or situations, the usefulness of postcards provide precious examples of the archeology of the visual conversation.

In its digital version, it appears at the core of e-mail and on-line forums, and then in multimedia messaging services, or MMS, that appeared with the first camera phones. The Sharp J-SH04, released in Japan in October 2000 at a cost of $500, works with the J-Phone network, which allows sharing pictures among users.

In the middle of the 2000's an intermediate stage was born with "monoblogging", where sharing pictures taken with a camera phone in a blog was the predecessor of the instant publication in social networks. Therefore, if there are two different uses for the connected image, taking one from the private conversation, and the other one from the public or semi-public conversation, it is equally important to notice the permeability between the different spaces, which is encouraged by the digital fluidity.

Recently baptized as "selfie", a form of contextual self-photograph, this type of picture is possibly the oldest identifiable practice of the connected image. The birth of camera phones in Japan is placed in the wake of the phenomenon, purikura 18, that can be attached multiple decorations with the goal of becoming collectible items (see fig. 3). The first camera phone model by Sharp has a small mirror in front, an original scheme to make taking self-portraits easier. The promotional images from that time leave no room for questions: the camera was conceived by the manufacturer to allow users to take pictures of them at an arm's length by using a lens of short focal length.

If these features were only imagined as a gadget, it is a more dramatic way to manifest the transformation of the uses provided by connected images. On July 7th, 2005, between 8:50 and 9:47am, four bombs transported by terrorists blew up three subway stations and a bus in London, resulting in 56 dead and 700 injured. While the media was not able to enter the subway, Sky News broadcasted at 12:35pm an image taken very near the attack: it was a picture taken at 9:25am with a camera phone of user Adam Stacey in the corridor connecting to King's Cross, and sent as an electronic message to many recipients (see fig.4). 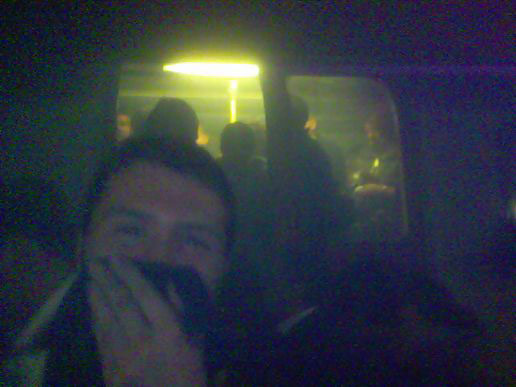 Although this image shows a face, it is by no means a portrait in the sense granted by pictorial tradition. And, even if the circumstances caused its public diffusion 19 , its initial share belonged to a private conversation. Due to the immediacy of its communication, the photo of Adam Stacey, taken on his demand by a friend who was with him in order to keep his next of kin informed, has, first of all, a useful function as a way of relaying quickly a fact.

If the documentary vocation is an integral part of the history of visual recording, this generally concerns specialized uses, such as scientific, media or industrial. In terms of personal photography, the use of the image continues being essentially symbolic: the preservation of memories or the writing of family history.

There are examples of practical uses, such as the documentation of an assessment of loss for an insurance company, that have been observed since the beginning of the 20th century. But they continue to be discreet, they don't matter to the observers and they aren't described in any history or sociology texts on amateur photography.

However, by making images available faster, some technical innovations such as the instant development proposed by Polaroid have competed to improve the practical use of pictures, and have made room for a wide range of recording uses. This also holds true for the instant transmission of the connected image, which gives photography access to the universe of communication. We can see a significant example of these current applications in the selfie of co-founders of Flickr, Stewart Butterfield and Caterina Fake, from October 2005. Titled " Hi Mom ", the picture published on Flickr has an accompanying explanation: "Sent to my parents while I spoke to them on the telephone so they could share the view of the environment where we were" ( see fig.5 ). 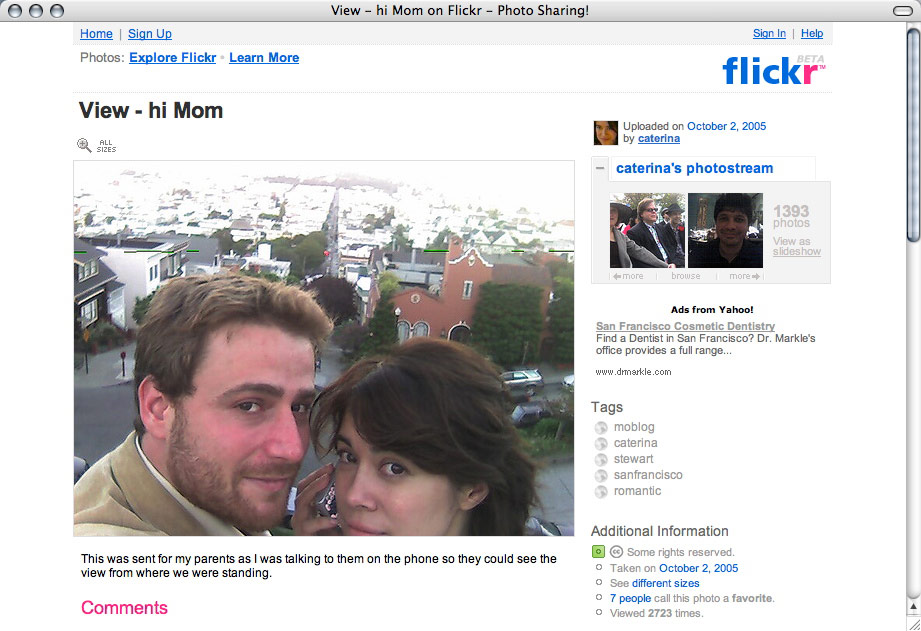 The available studies on new communicative practices witness an unprecedented extension of the utilitarian applications 20 . By associating the visual dimension with shared data, the image allows to supply information about a situation (an arrival to or presence in a place, the use of a mean of transportation...), a check of appearance (an outfit test, the result of a haircut, physical aspect...), but also countless practical information, such as the purchase of a product, the composition of a dish, the state of a building, etc. Photography allows us to record all of this or transmit it faster than a written message 21 . The connected image lends itself particularly to the regular exchange of signals destined to maintain an effective, friendly or romantic relationship. It can also serve for political or military goals, such as the pictures of gatherings during the Arab Spring, immediately distributed to get people to join the demonstrations 22 .

The extreme variety of these applications shows a fast adaptation to connected tools, as well as the development of a new skill: the ability to translate a situation visually, a way to be able to offer a summary, often personal or playful, a way to reinterpret reality that reminds us of "The Practice of Everyday Life" by Michel de Certeau 23 .

21 According to ComScore, 14.3% of European smart phones owners (that is 155 million people in August 2013) have sent the picture of a product on sale to a close relation in order to get information or to ask for details, a slightly higher percentage of the total of sent SMS or calls (14%) with the same purpose (Ayaan Mohamud, "1 in 7 European Smartphone Owners Make Online Purchases via their Device", ComScore, Octobre 21st, 2013 (http://www.comscore.com/Insights/Press_Releases/2013/10/1_in_7_European_Smartphone_Owners_Make_Online_Purchases_via_their_Device).

André Gunthert (Francia, 1961). Lives and works in France. He works as a researcher in cultural history and visual studies, holds a PhD in Art History and is an associate professor at the EHESS (School for Higher Studies in Social Sciences). Gunthert is also the director of the Laboratory of Contemporary Visual History (LHIVIC) and the founder of the digital journals Photographic studies and Visual Culture. He is currently carrying out research into the new uses of the digital image. His writings on visual culture can be consulted in his blog: L'Atelier des icônes.
Tags: France Expanded Photography Essay André Gunthert Selfie 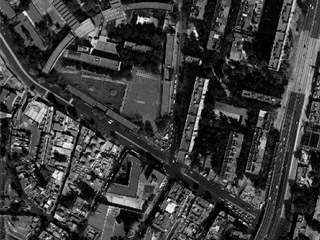