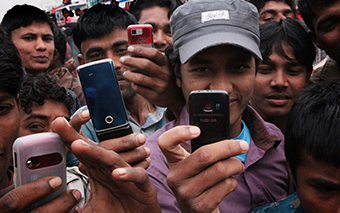 Photography has modified not only its devices for recording images but also its range of subjects and of course its means of dissemination. Traditional media such as paper and books were taken over a long time ago by their digital counterparts, which enable thousands of images to be shared on the Internet and mobile devices every day. As time went by and technology evolved, graphic formats emerged with a distinct advantage in terms of image quality, the use of animations and the layer of interaction. Many of these, such as Flash technology, were at first innovative and widely used, but rapidly replaced.

In this context, one of the formats that has existed alongside the Web since its inception, and remains popular, is GIF (Graphic Interchange Format), a form of technology developed in 1987 by the company CompuServe. Long before screen and monitor resolution brought viewers thousands or even millions of colors with sophisticated compression algorithms, such as JPGs or PNGs, the GIF already enabled graphics of a maximum of 256 colors to be inserted. A few years later, an improvement allowed more than one graph to be incorporated sequentially, and for the first time modest animations could be created on the emerging Web, with low weight and rapid display without extra plug-in. And so the ANIMATED GIF was born.

Other formats have gradually fallen into disuse because of incompatibility with new devices, their high processing requirements for proper display and visualization, or their reliance on complex tools to add animation and interactivity. Meanwhile, the GIF has continued to function, thanks to its flexibility and compatibility with many different systems, browsers and even mobile devices. As a result, it has been widely used recently, and is no longer limited to publicists and marketers.

In this context, and as part of the current trend towards immediacy, GIF has established itself as an interesting tool for visual expression and experimentation, because of its particular technical, communicative and expressive qualities. Indeed, ANIMATED GIFs enable users to create authentic moving photographs that record short, repetitive actions. Reproduction in a loop (infinite repetition) emphasizes the idea of the redundancy of the moment, and consequently the instant grows, completes the action and highlights it. Time is no longer suspended for eternity, but is now redundant. This is the case of the so-called “Cinemagraph”, a variation of the animated GIF in which movement is restricted to an area or specific element of the shot. GIFs do not attempt to freeze the instant and instead insist on it, expressing itself time and time again in the image.

This narrows the gap between photography, cinema and video. These frames in movement allude to the first cinematographic films by the Lumière brothers, which captured instants of an action and reproduced the sequence to emulate movement. Unlike that era, viewers are currently not only accustomed to images but oversaturated with them. Observation is no longer guided by surprise, but by identification with an instant that is indefinitely prolonged.

In contrast with the visual quality of cinema and photography, ANIMATED GIFs remind us of the texture of the first video cameras, a pastel-colored, poor quality image lacking depth. Cinema and photography maintain a certain expressive and visual independence from video and GIF. Those media refer to different concepts, as they have varied methods of dissemination and a different form of interaction with the viewer. They establish a relationship with an active spectator who repeatedly gives meaning to the image, reconstructing and reinterpreting in accordance with various factors that range from perception and the relation of each person to time, to external factors such as interface and the device supporting the image.

And yet, the contents manipulated by GIFs often draw on images extracted specifically from photographs, films or videos, and treated to emphasize a concrete action or some elements in movement. GIF narratives are ephemeral but reiterative, describing the instant and action, delving into content and the capacity for seduction and transmitting ideas and feelings. Indeed, action in movement is always the backbone of a visual construction charged with meanings.

Not surprisingly, this digital format is currently being explored by visual artists and photographers, to produce images in movement as an alternative to the formulas of cinema, video or animation shots. Though it may seem complex to understand the spectrum in which the ANIMATED GIF exists, the format has transformed its limited scope in the use of time into its greatest asset, with extensive expressive and conceptual possibilities. It also provides guidelines to redefine the notions and concepts, even at a theoretical level, involved in the constant evolution of photography, which will certainly not be the same in years to come.

Melissa Valenzuela (Colombia, 1982). Lives and works in Mexico City. She holds a Masters’ Degree in Visual Arts from the Escuela Nacional de Artes Pláticas at the Universidad Nacional Autónoma de México (UNAM), and studied Audiovisual Communication at the Pontificia Universidad Javeriana de Bogotá. Valenzuela is an artist, and her work consists of self-portraits and recollections that address various nuances of perception, representation and memory. She also works in curatorship and education to integrate her artistic and research work..

Ehekatl Hernández (México, 1975).received a Bachelor’s Degree in Graphic Design from the Escuela Nacional de Artes Plásticas at UNAM in Mexico, and a Master’s Degree in Multimedia Applications from the Universidad Poltécnica de Catalunya in Spain. He has over 15 years’ experience in graphic design and planning, developing and implementing web projects. Hernández has given diploma courses in web design at UNAM. He has spent nine years contributing to the web design and multimedia area at zonezero.com, and also works as a consultant for various companies as well as coordinating the e-learning system of the Virtual Campus of the Pedro Meyer Foundation.
Tags: Expanded Photography Mexico Ehekatl Hernández Melissa Valenzuela Colombia Article