The connected photography can't exist without a recipient. Beyond a first-degree utility, the communicative systems also give images the function of engaging in a conversation or a dialogical unity. This way they acquire a second-degree utility as expressive forms. In private exchanges, the protection of the messages and the familiarity of the participants encourages implicit contents, contextual games, or transgression24. In social networks, the public visibility enables collective practices: a participative interpretation through a series of commentaries generated by an iconic source, or a choral construction, by taking and repeating a motive transformed in a meme25, that shows the social productivity of visual forms (see fig. 6). 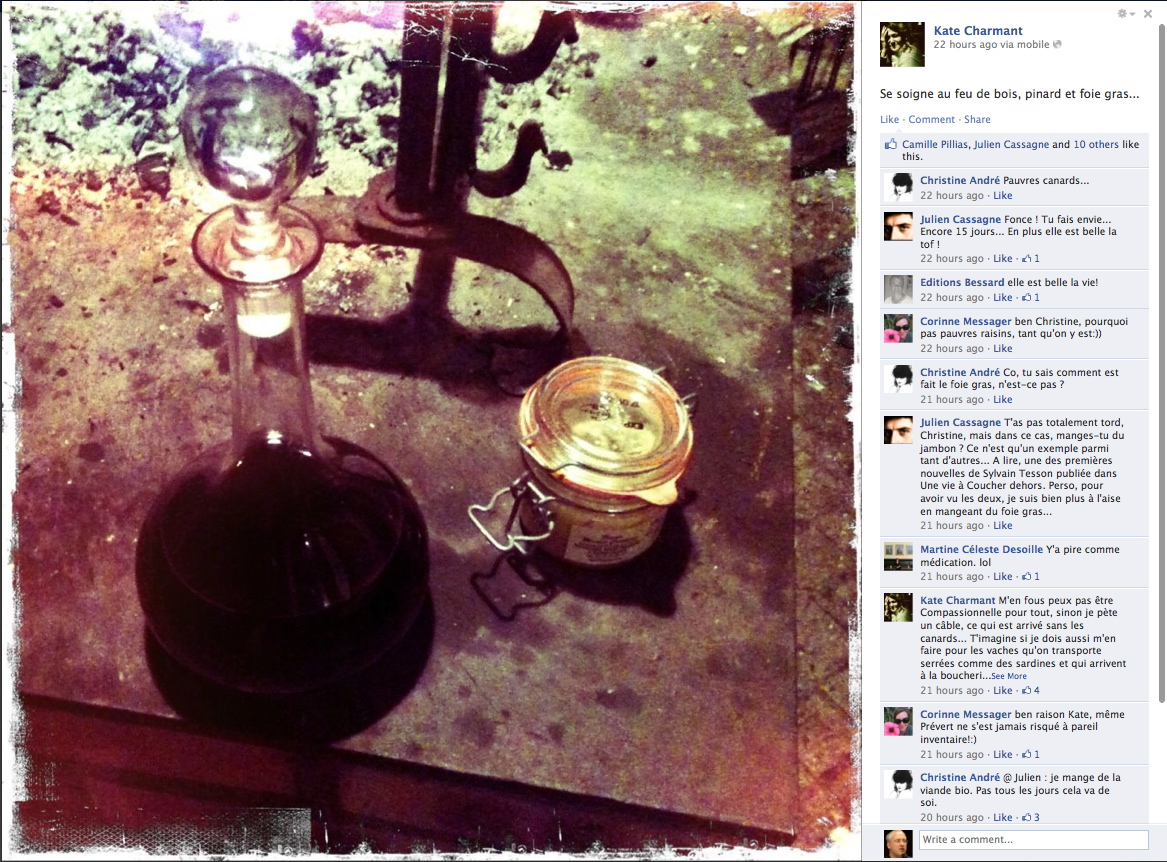 As a sign of its success, we see a tendency to an autonomy of the visual conversation, through tools of collection and rebroadcast of images, such as Tumblr (2007) or Pinterest (2010), where retaking and circulating the content are the main resources of validation. A platform dedicated to the connected image, such as Instagram (2010), allows helping in the creation of collaborative answers to a common event, a meteorological phenomenon or a cultural occasion, welcomed by a photographic production whose display takes the aspect of a collective game (see fig 7). 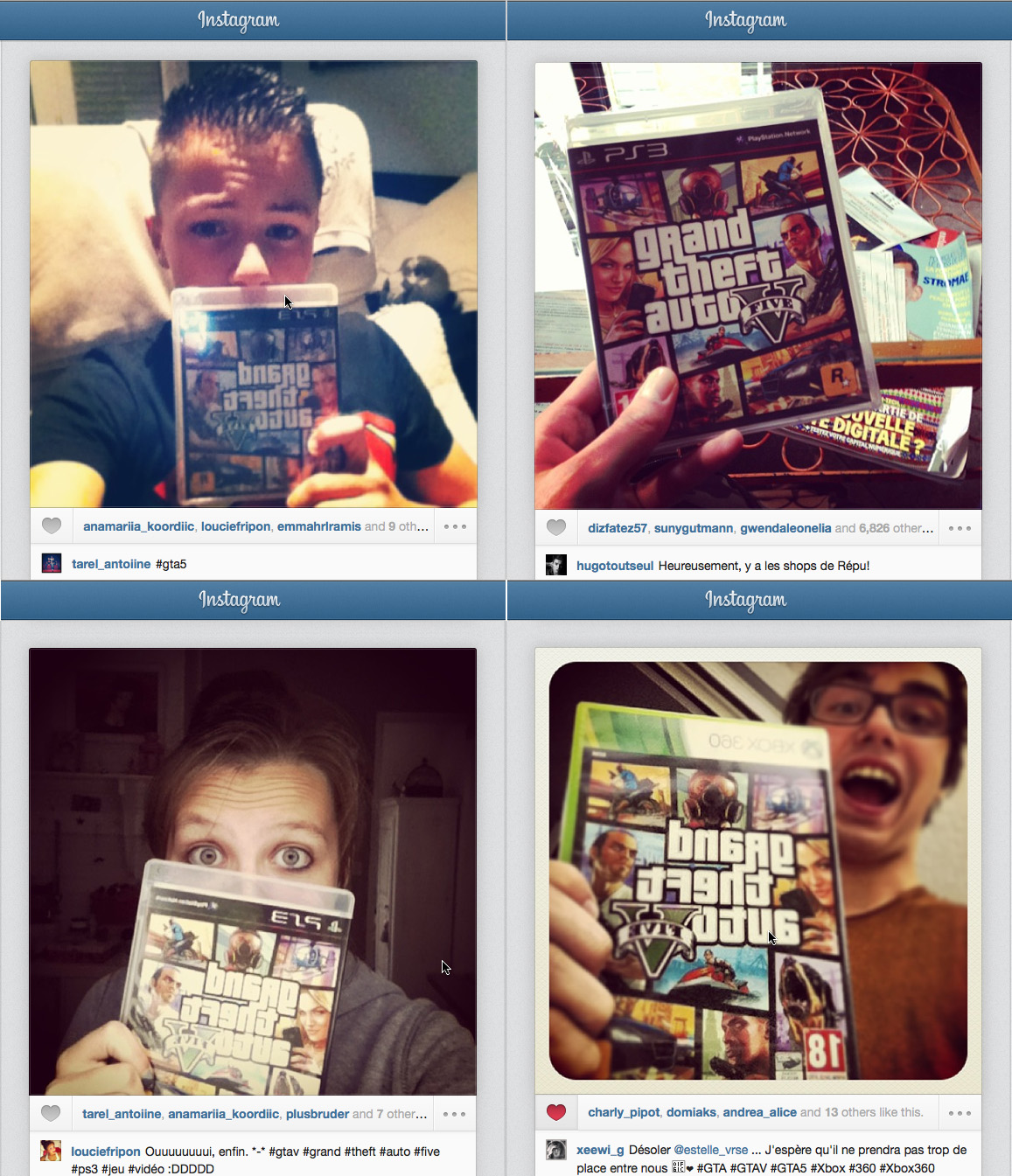 Conversely, integrating images in the conversation makes them benefit from the validation systems that reward participating in social networks. The exposition and public appreciation of self-produced photography grant it a critical, aesthetic or social legitimacy. They also favor the presence of an autonomous interpretation exercise, that seems necessary to reduce the ambiguity of the images26.

By sharing broadly the new visual practices, the big social networks also give them an unprecedented visibility and contribute to their viral propagation. A satirical video published in December 2012 at the College Humor site redirects a song by Nickelback to make fun of the trends in connected photography27. Pictures of meals, feet, cats, airplane wings, filters, selfies, etc.: the clip draws up a long list of themes repeated on the timelines of Facebook and Twitter. This excellent parody shows that placing these visual forms together is beautiful and correctly identified as numerous autonomous patterns. 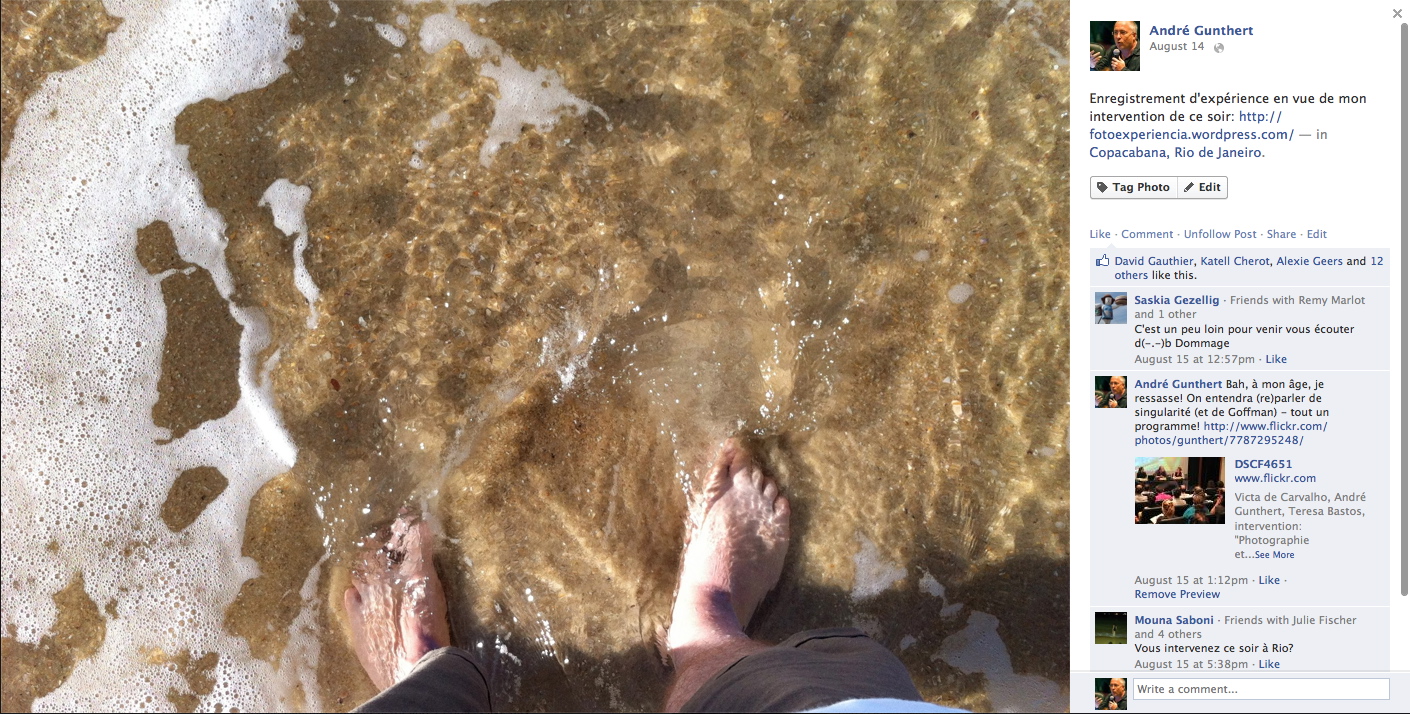 By examining the characteristics of private photographies from the early 20th century, Marin Dacos noticed that a large part of album photos reproduced the models of studio photography or publicity published on the papers28. By granting a group of visual practices a certificate of recognition, the video of College Humor suggests that from now on we help in a reversal phenomenon. As with memes or recommendations, the private iconography benefits from the transition that sees social networks take the place of traditional media in terms of cultural developers. Through them, the vernacular productions achieve a rank of identifiable and reproducible models.

This new visibility manifests particularly through negative reactions. This way, in 2013 we were able to see "selfie" being selected as word of the year by the editors of the Oxford Dictionary due to a share of media commentaries that denounced that the Web was saturated with this narcissistic exercise of connected self-portraits29. By criticizing an excessive presence, this reception is witnessing an standard that the genre is in the process of achieving.

When Michel de Certeau was trying to get close to the "ordinary culture", he expressed his discomfort at facing the "almost invisibility" of practices "that were hardly signaled by their own products30". On the contrary, the visibility that the main social networks give the individual expression reverse the dynamic of the production of the standard. In the past, the popular classes copied whatever the stars did. From this point forward, celebrities and the big names of this world are the ones who reproduce the models issued by the general public by conforming themselves to the rules of the selfie. 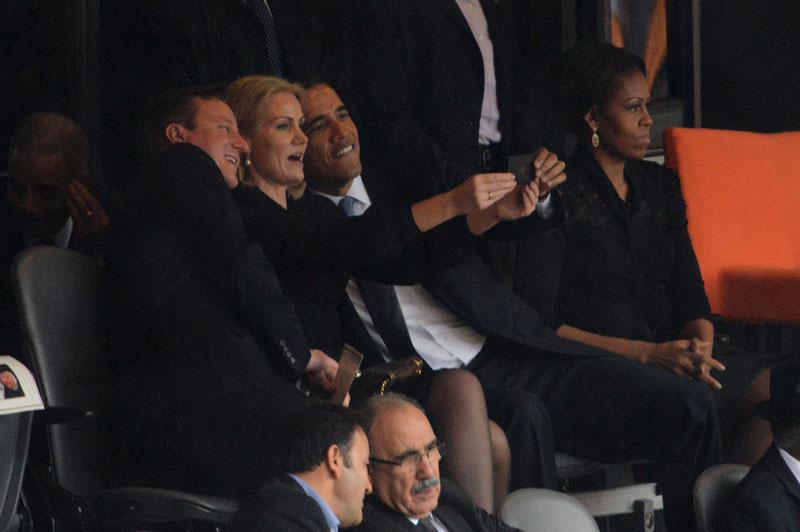 Fig. 9. Roberto Schmidt, photograph of a selfie with a smartphone by Danish Prime Minister Helle Thorning--‐Schmidt next to Barack Obama and David Cameron during the Nelson Mandela memorial service, December 11th, 2013 (AFP).

We can regret this development of a "barbaric taste" —to quote Kant's expression retaken by Bourdieu31— by social networks, the intermediaries of the ordinary culture. But isn't bringing good and bad taste into opposition the wrong way of address the problem? While the visual or musical practices encourage an unexpected approach inspired on art history, that places first the creativity of the authors and supposes a self-sufficiency for the expressive motivation, the test of language forms proposes a neutral description of the process. But, unlike the creation, or even the expression, the conversation is an autonomous domain with a communicative and social utility32. In this context, the new visual practices shouldn't be analyzed only from an aesthetic point of view.

The victory of use over content is particularly obvious with Snapchat (2011), a mobile application of visual messaging that offers the possibility of deleting the picture a few seconds after consulting it.

This feature of protected conversations through the fugacity of an iconic message has become a success for this medium with the young population, who uses it at a rhythm similar to SMS. By programming the disappearance of the image, Snapchat adds a playful dimension, as well as a supplementary freedom for the user, promoting an informal or relaxed use. The application clearly illustrates the desertion of the territory of labor and elaboration in favor of a conversation in real time. Already broadly detectable by most social networks, this shift suggests the description of ordinary practices of the image as a new language.

As with the arrival of the cinema or the television, the arrival of the conversational image transforms deeply our visual practices. Photography used to be an art and a medium. We are living the moment when it is accessing the universality of a language. Integrated by multipurpose tools for connected systems, the visual forms have begun to engage greatly in both private and public conversations. Whatever individuals can do for their production and interpretation contributes to a fast evolution of formats and uses. The visibility conferred by social networks speeds their diffusion and gives birth to self-produced standards. The appropriation of the visual language helps reinvent everyday life. Moreover, the extension of the utility of images states specific problems to be analyzed. If the semiotics of visual forms had until now leaned on a narrow register of assumed contexts, identifiable by a unique formal test, the variety of these new applications is imposing a change towards an ethnography of uses.

André Gunthert (Francia, 1961). Lives and works in France. He works as a researcher in cultural history and visual studies, holds a PhD in Art History and is an associate professor at the EHESS (School for Higher Studies in Social Sciences). Gunthert is also the director of the Laboratory of Contemporary Visual History (LHIVIC) and the founder of the digital journals Photographic studies and Visual Culture. He is currently carrying out research into the new uses of the digital image. His writings on visual culture can be consulted in his blog: L'Atelier des icônes.
Tags: France Expanded Photography Hybrid Genres Essay André Gunthert Selfie