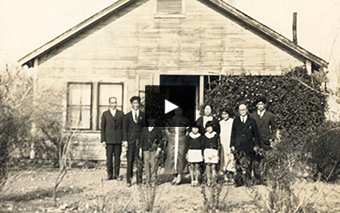 
Is a transmedia storytelling project documenting and sharing stories of the Japanese American and Japanese Canadian experience after they left the internment camps. The project consists of a feature-length documentary film, titled Good Luck Soup and an interactive, participatory website, Good Luck Soup Interactive. On this website stories will be told through uploaded text and photographs from internment camp victims, or their families, and will be shared through an interactive website and map. 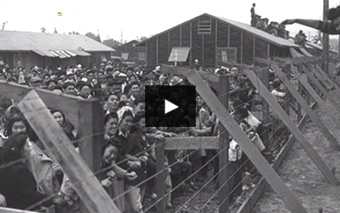 In this short documentary, 88-year-old Yutaka Kobayashi shares his struggles as a Japanese American before and leading up to the World War II Japanese American Internment Camps. Surprisingly, it was during this dark period that he experienced compassion and kindness from where he least expected it, a gun tower guard from within the Topaz Internment Camp.

ZZ. What has been the reaction of the public to your invitation to participate in your transmedia storytelling project?

MH. We've had a consistently positive response from the Japanese American/Canadian community. Initially, I think many have been nervous about sharing their own stories and experiences, but once we sit down with them and talk about their life, they tend to open up. It's been a form of catharsis, I think, because many people have never discussed their issues or experiences of being Japanese American/Canadian... and some of these things are very difficult topics or thoughts that have been bottled up. So, it's a very emotional experience to share these thoughts and feelings. We haven't yet opened it up to the general public, but again, everyone has been consistently positive, and I have no reason to think the reaction will be any different once its available to all Japanese Americans and Japanese Canadians.

ZZ. What means of publicity are you using or are you planning to use for the diffusion of the project?

MH. Social media will be a huge tool for publicity and marketing. We've already reached and met so many people through Twitter and Facebook, and we'll certainly continue to utilize those outlets. We've been in communication with many Asian American and Asian Canadian organizations that have offered their support once the project is complete, and the opportunity to collaborate with entities such as the Japanese American Citizens League, the Japanese American National Museum and the Nikkei National Museum would be priceless. We're certainly inspired by their mission and view our project as a continuation of what they offer the public.

In addition to the interactive documentary, this project also includes a feature length film. Film festivals will be another great opportunity to screen the film and present the interactive project to an audience.

ZZ. Can you share with us how you have experienced the realisation, dissemination and the reach of the project thus far?

MH. It's been a very gradual and collaborative process, and luckily I have an incredible team of colleagues and friends that have made the realization of this project possible, and without their help, I would not have been able to get this project made. The work load is split up fairly well. Right now, our web-designer/coder (Russell Goldenberg) is building the site. He's the one sitting alone typing away at his computer. Every few weeks, we'll all have a meeting where we discuss the direction of the project... and then Russell goes and brings it to life. Billy Wirasnik, Emily Ferrier and myself and have been in charge of content aggregation. So we're narrowing the aim of the stories and in many cases, going out and finding those stories and individuals. It's a solid collaboration made up of various creative visions, rather than one. And, as the Project Creator, I really enjoy a hands-off approach that allows individuals to run off with an idea and make it their own.

Matthew Hashiguchi (1984). Based in Boston, Massachusetts. After graduating from The Ohio State University in 2007 with a BA in Photojournalism, Matthew went on to work and intern as a multimedia journalist for The Findlay Courier, The Lima News and The Washington Post. In 2008, he returned to school and graduated from Emerson College with an MFA in Visual and Media Art and has since been working as an independent documentary filmmaker and educator, whose work focuses on the diverse cultural, social and ethnic stories of American society. For his film The Lower 9 he has received various awards.
Tags: United States Video Interview Japan Photonarrative Matthew Hashiguchi