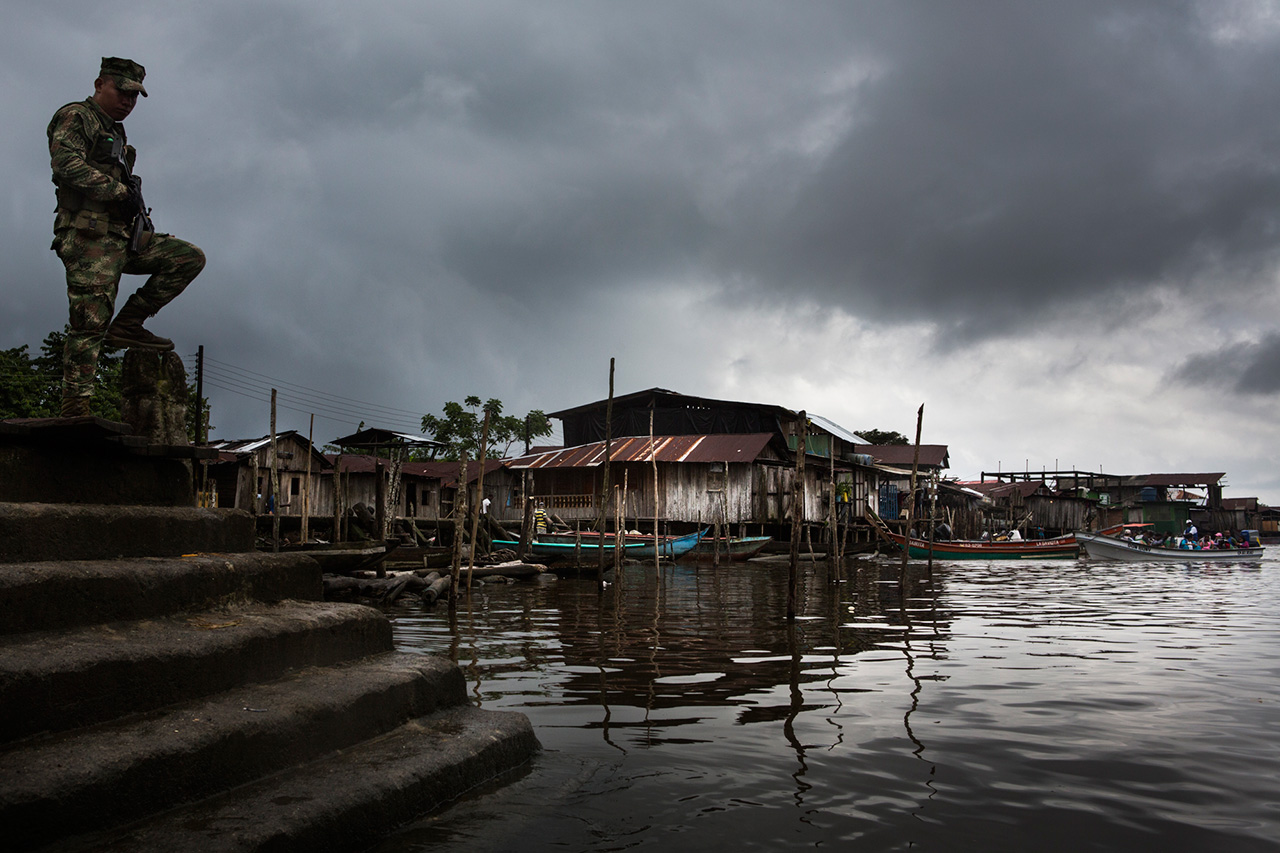 The Colombian army at a checkpoint on the Pacific Coast, a region with a strong presence of guerilla movements. 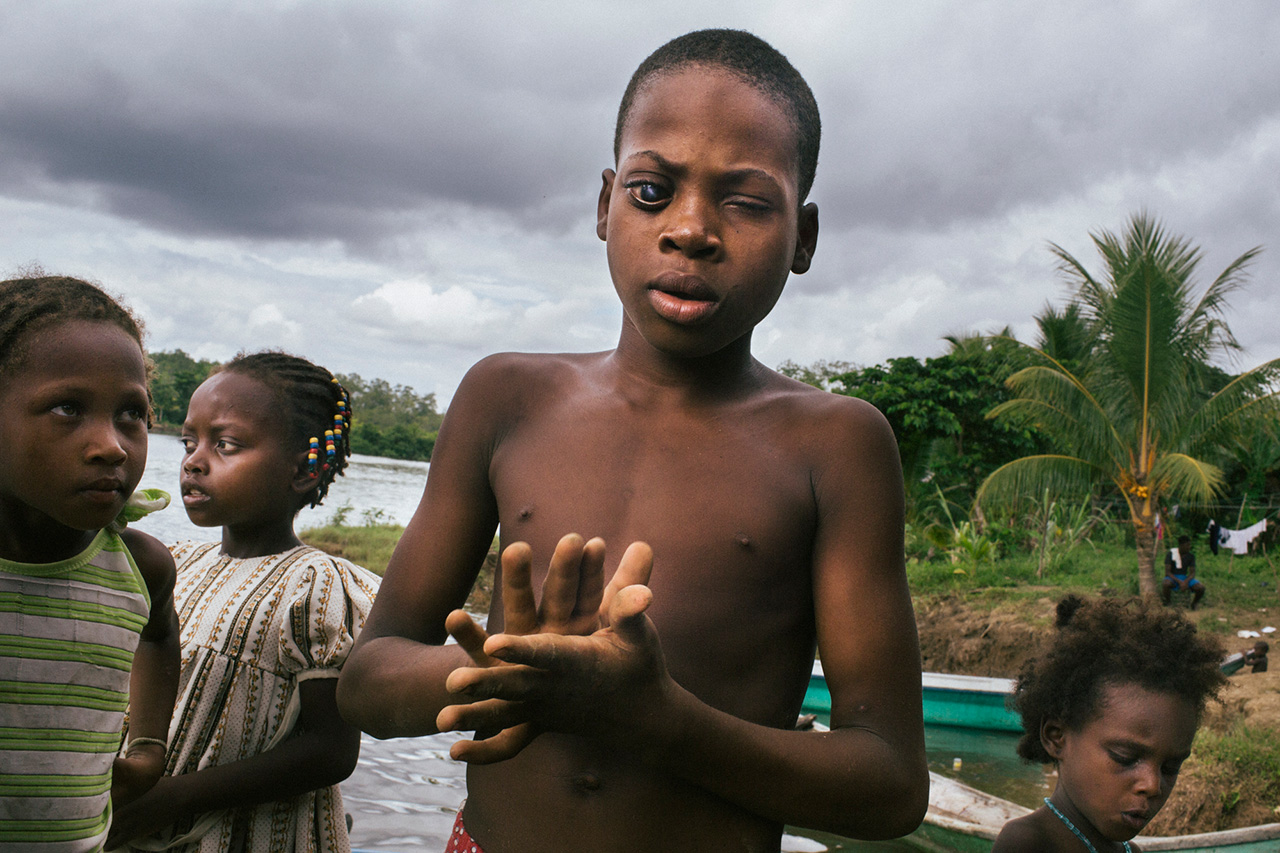 A young fisherman in a remote town in southwest Colombia. “How is life here when you can’t see the river?” 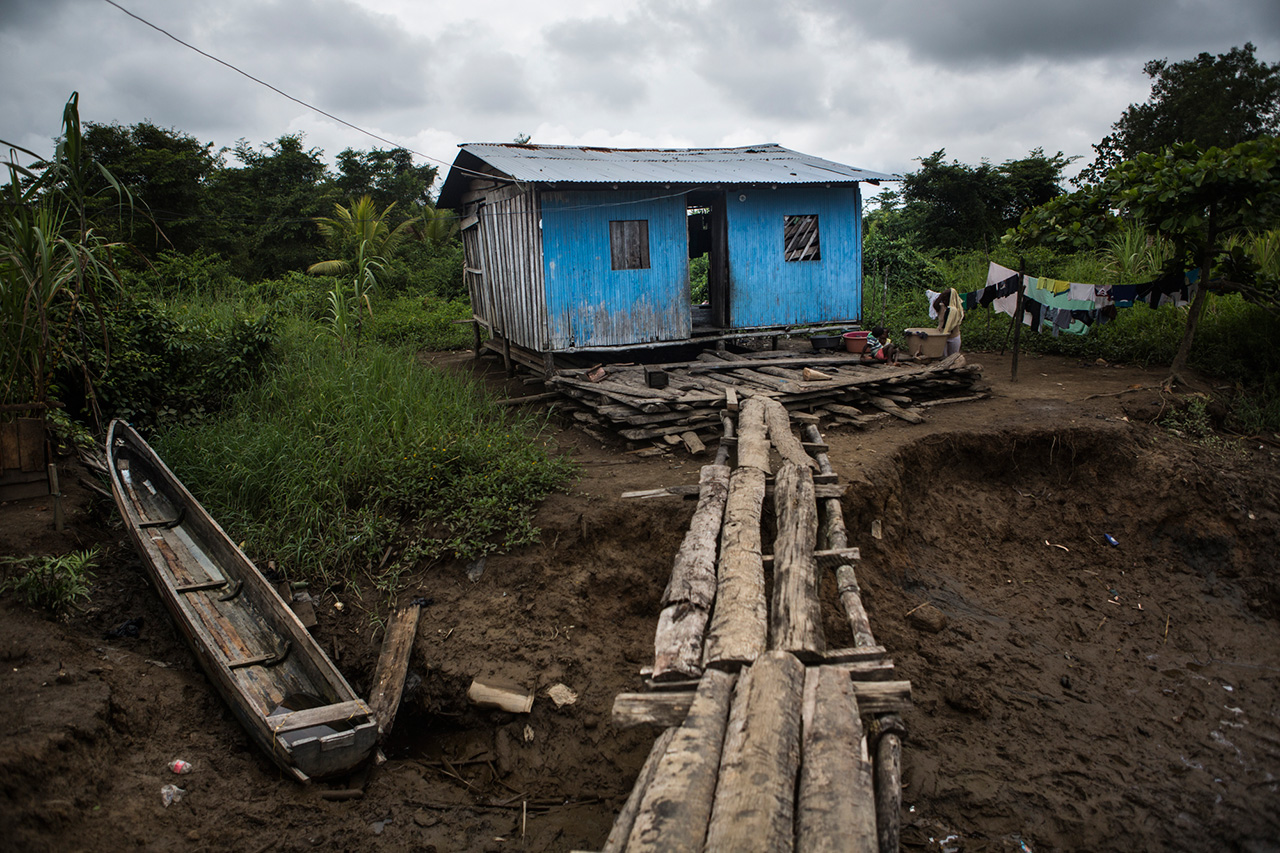 In many rural communities the river is a source of life. Everything comes from the river and everything ends in the river.

Three miners descend into a mine in Segovia, Colombia. Natural resources –such as gold– fuel the conflict in many parts of the country. 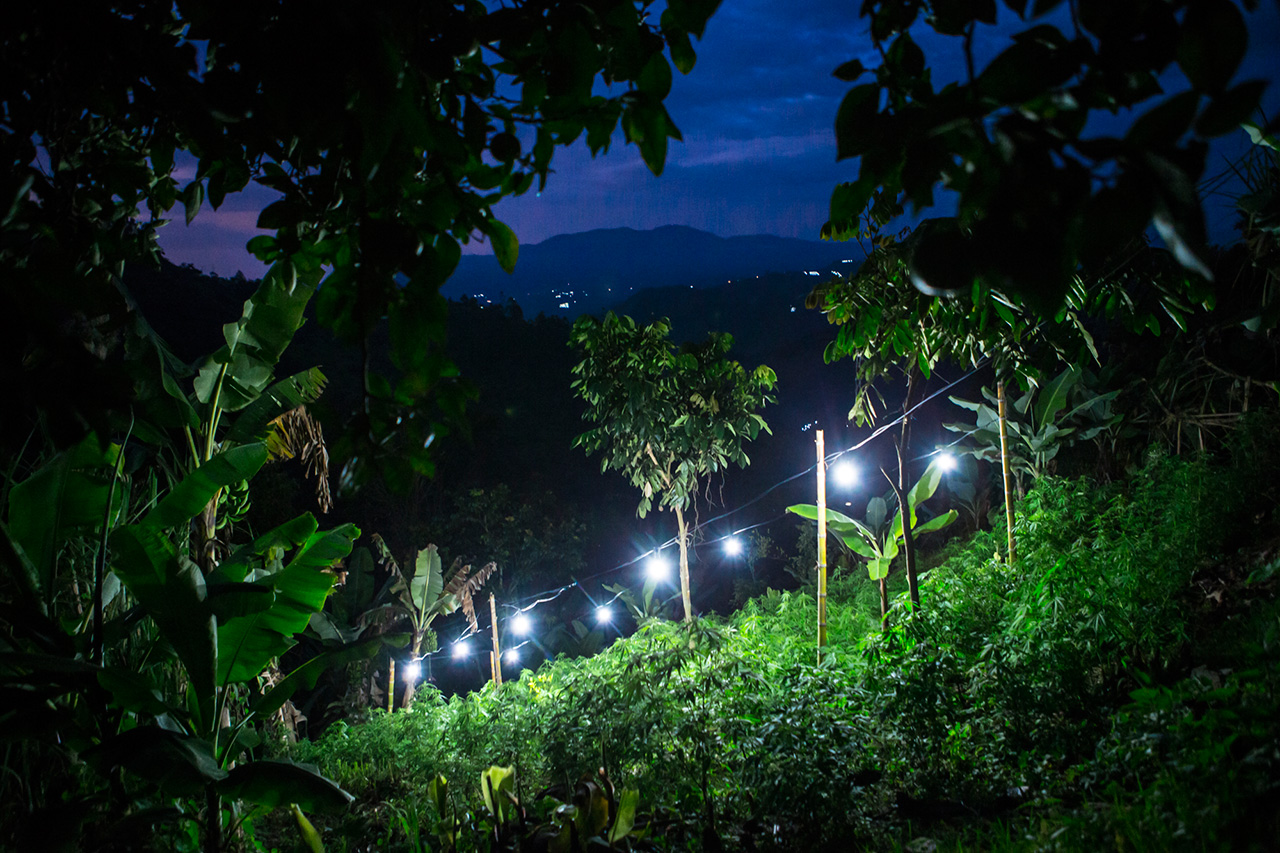 Next to their huts in the mountains of Cauca, many people cultivate marihuana plants in order to survive. 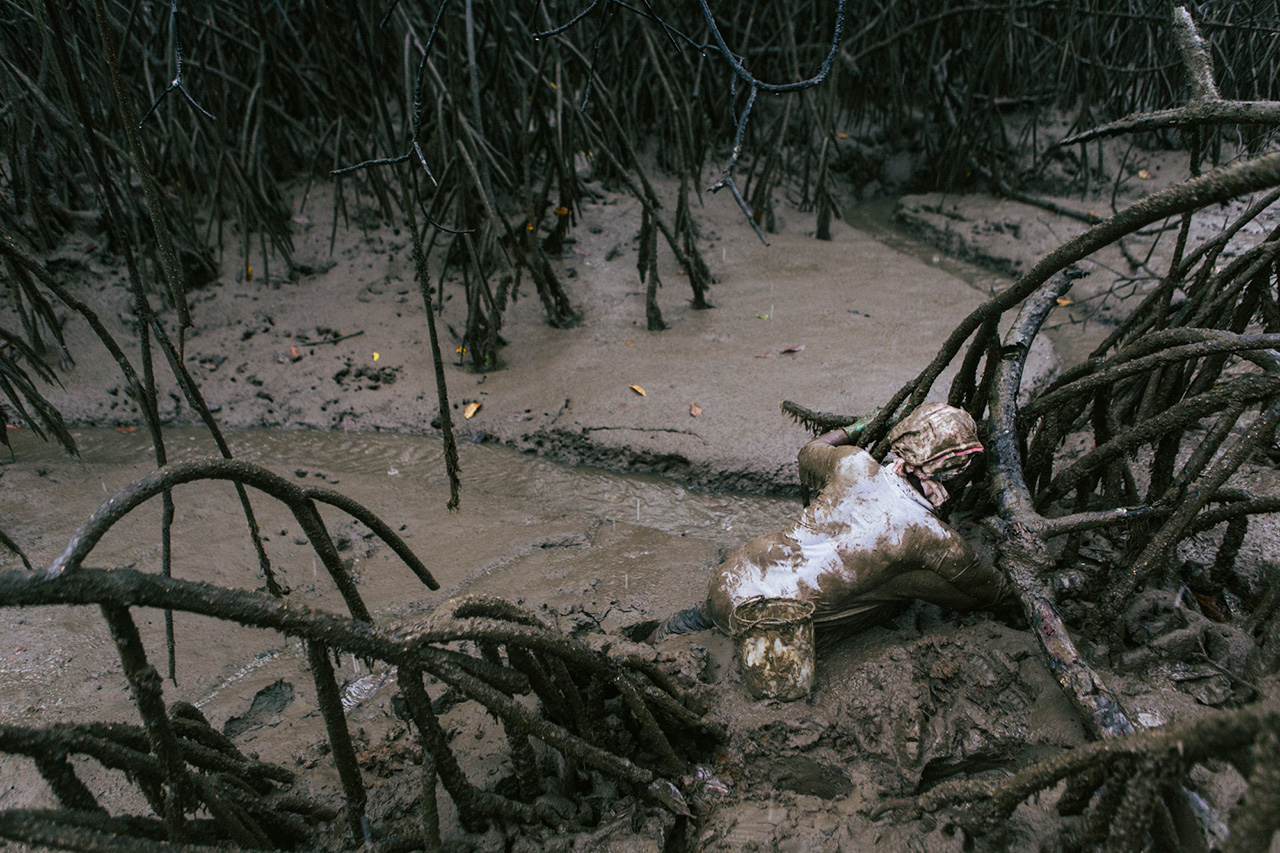 When there’s nothing to eat, even the elderly go into the mangroves in search of seashells. 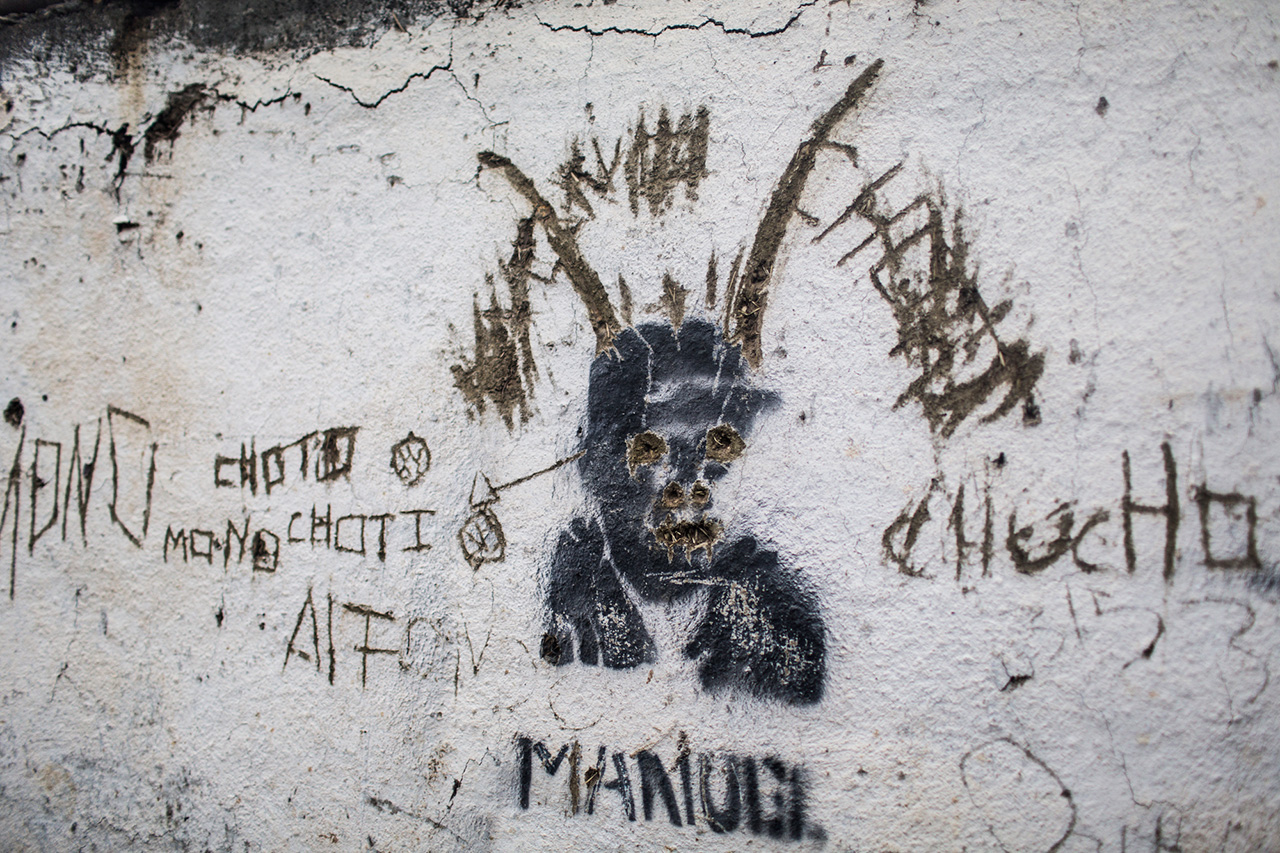 A misshapen graffiti of the commander Manuel Marulanda, one of the founders of the FARC. In the mountains of Cauca this guerrilla group and the population go a long way back and the FARC has a lot of support from civilians. Colombians have nevertheless also suffered immensely from the conflict between the government and this armed group. 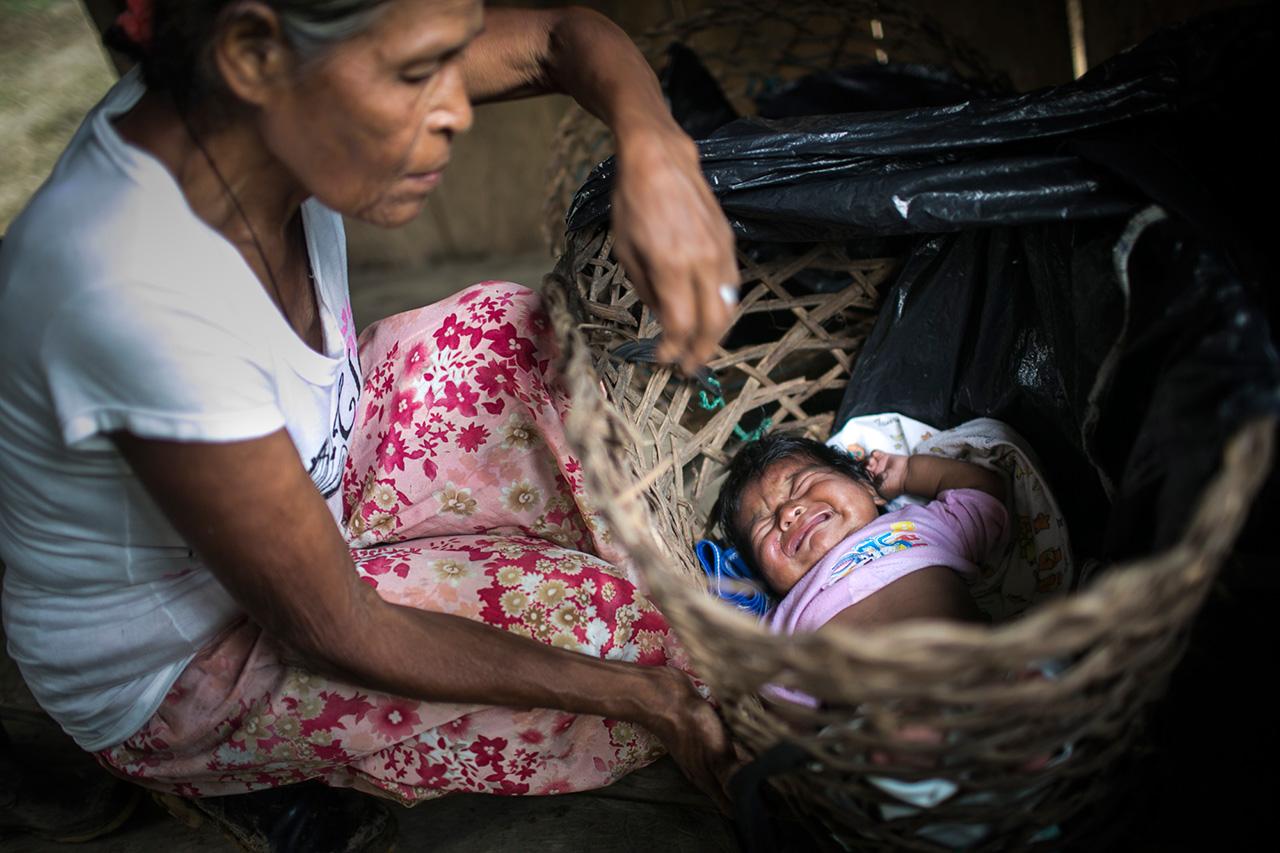 In the indigenous culture grandparents teach and absorb, they form the foundation of family structures. 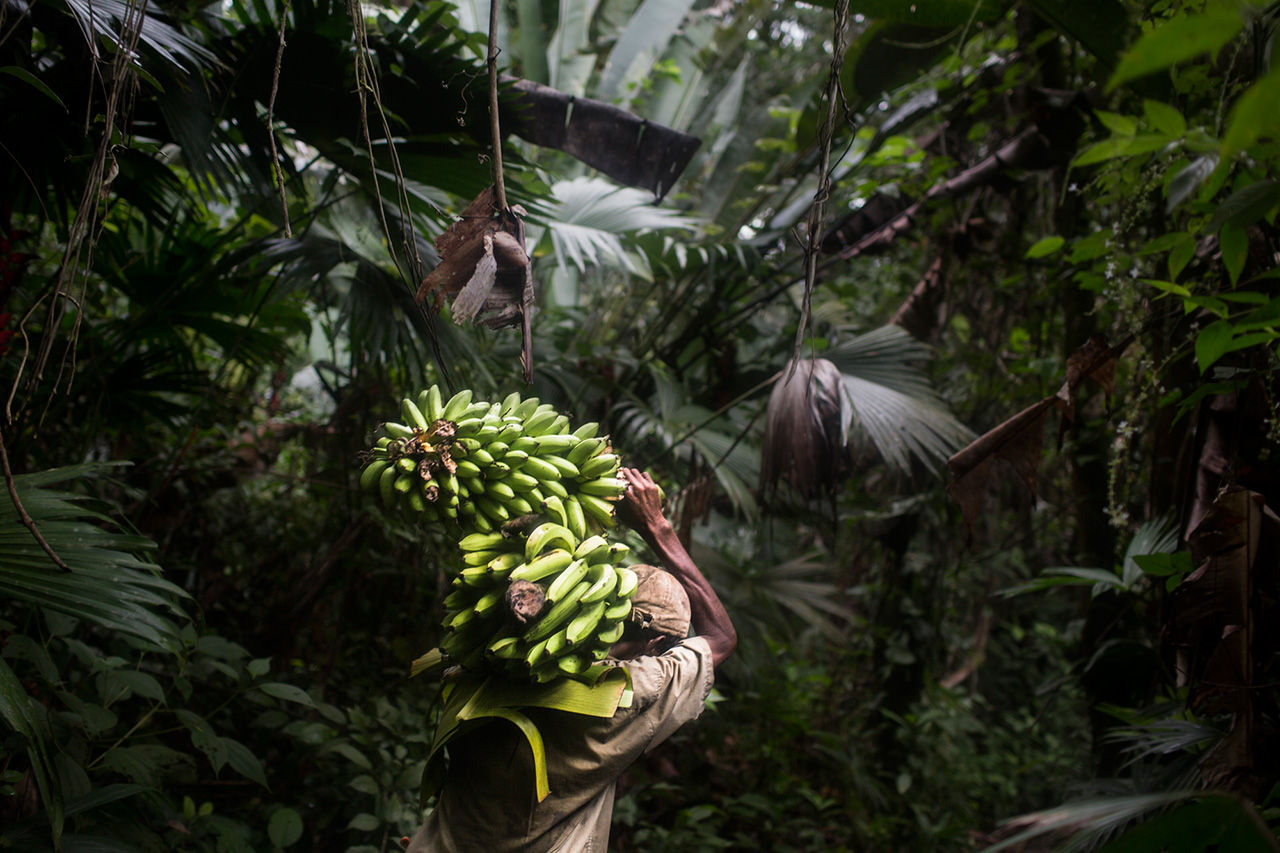 A farmer carries plantains to the market where they have very low value. For many peasants in Colombia, lucrative markets are unreachable. 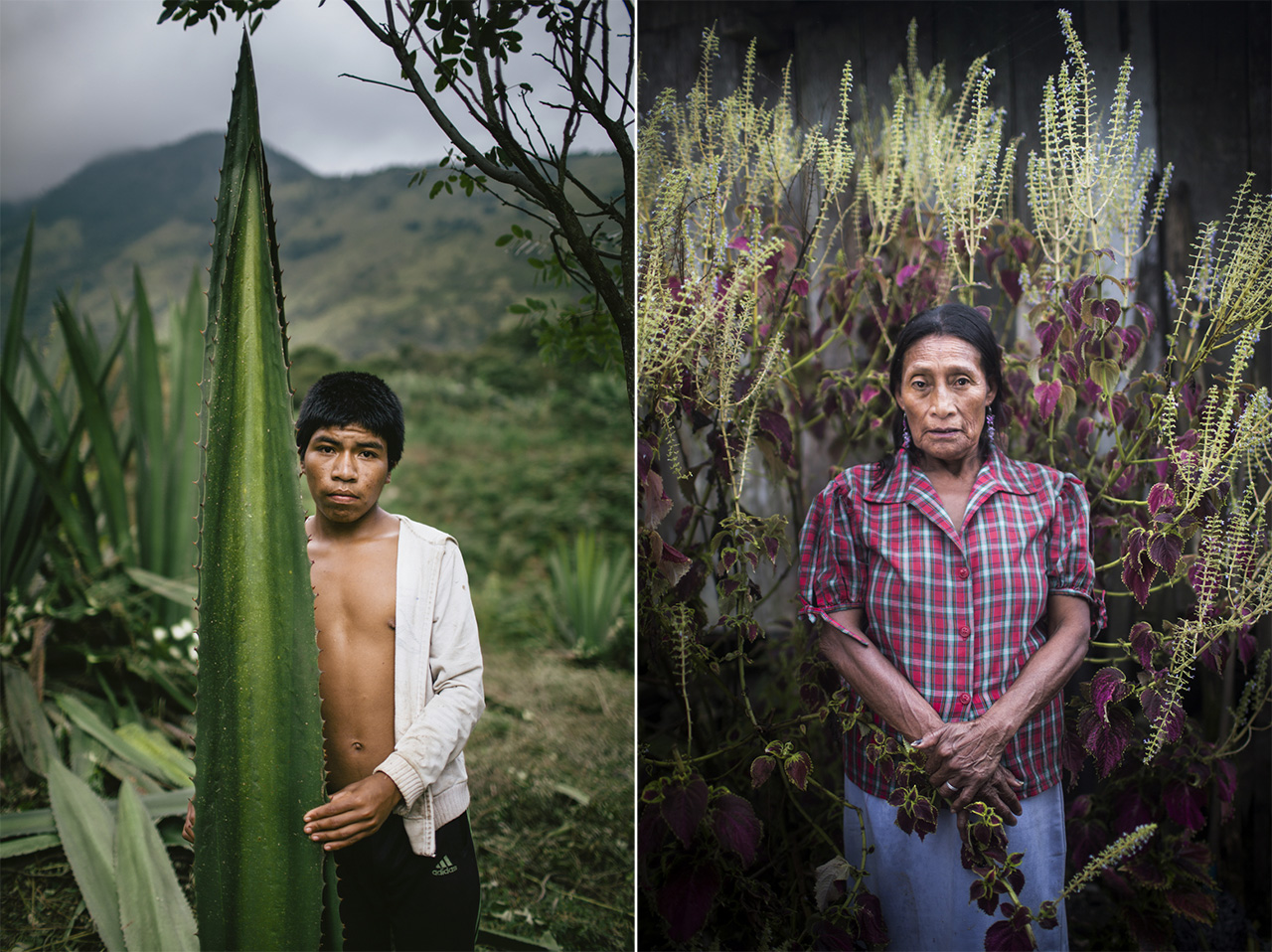 In rural areas, men and earth are one of a kind. When both are separated by force, due to displacement or forced migration, local social structures suffer, often creating even bigger movements towards big cities. 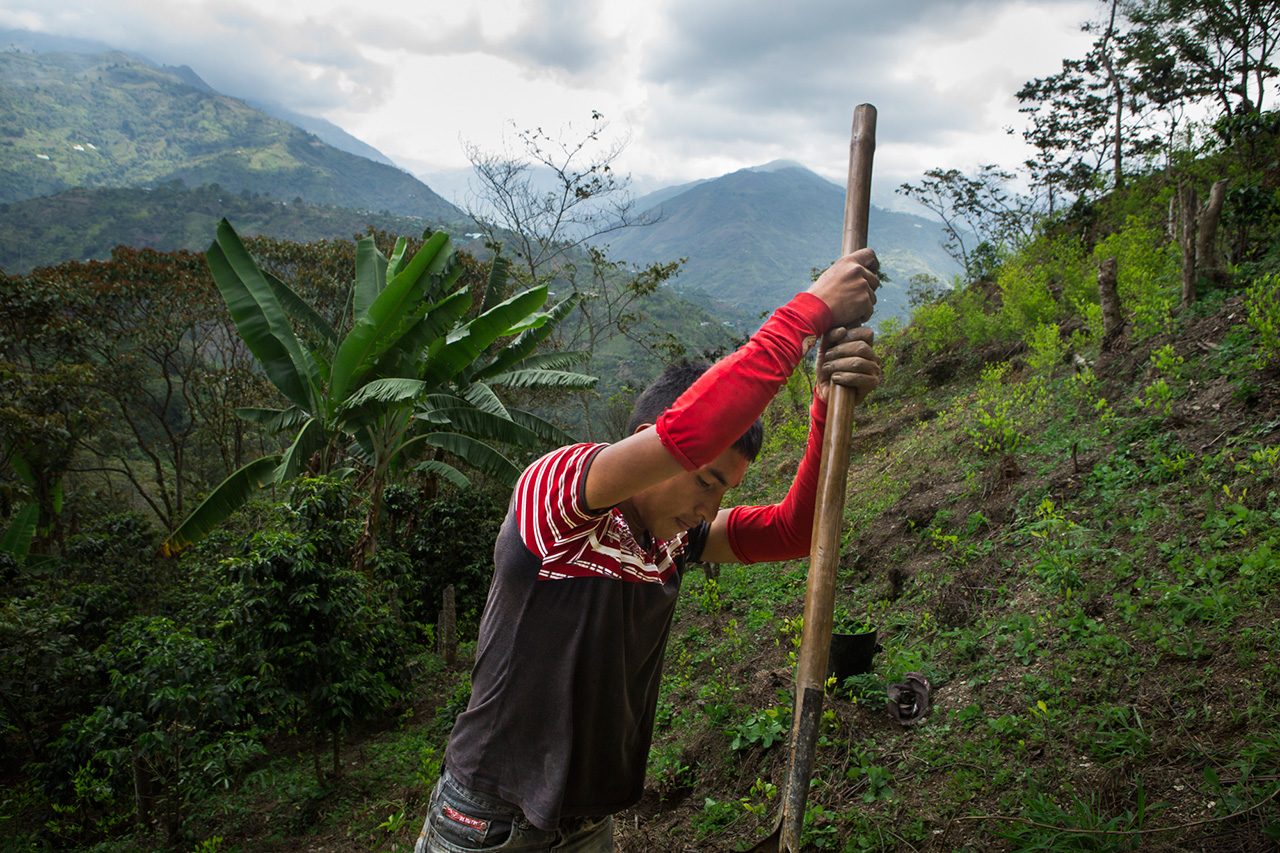 A coca farmer in the mountains of Cauca. 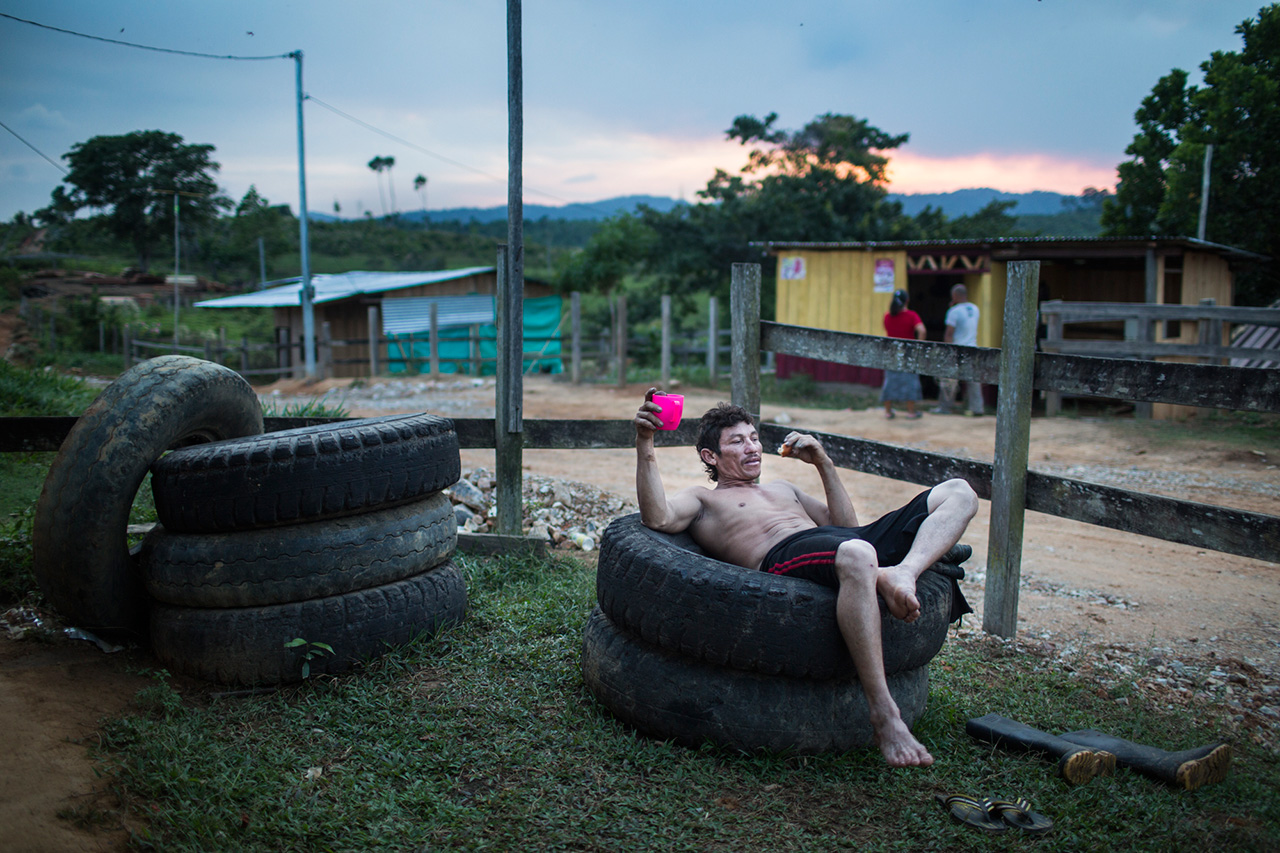 FFarmers live from logging to survive. As only the biggest trees can be sold; forest get cut down completely. After this happens, the area is burned down and the space is used for cattle ranching. 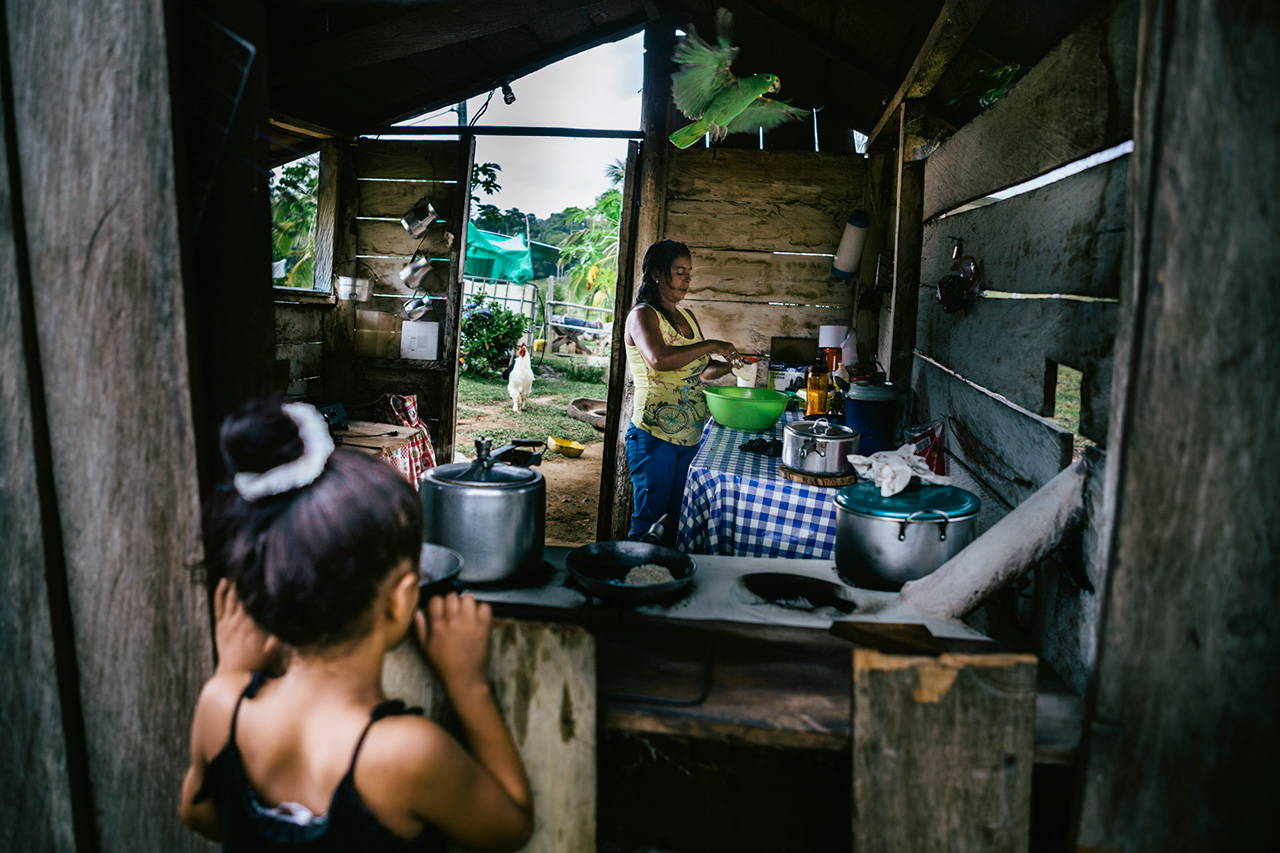 In remote areas of the Antioquia region, one of the guerrilla groups regulates daily life, “speaks the law”, solves conflicts and punishes. 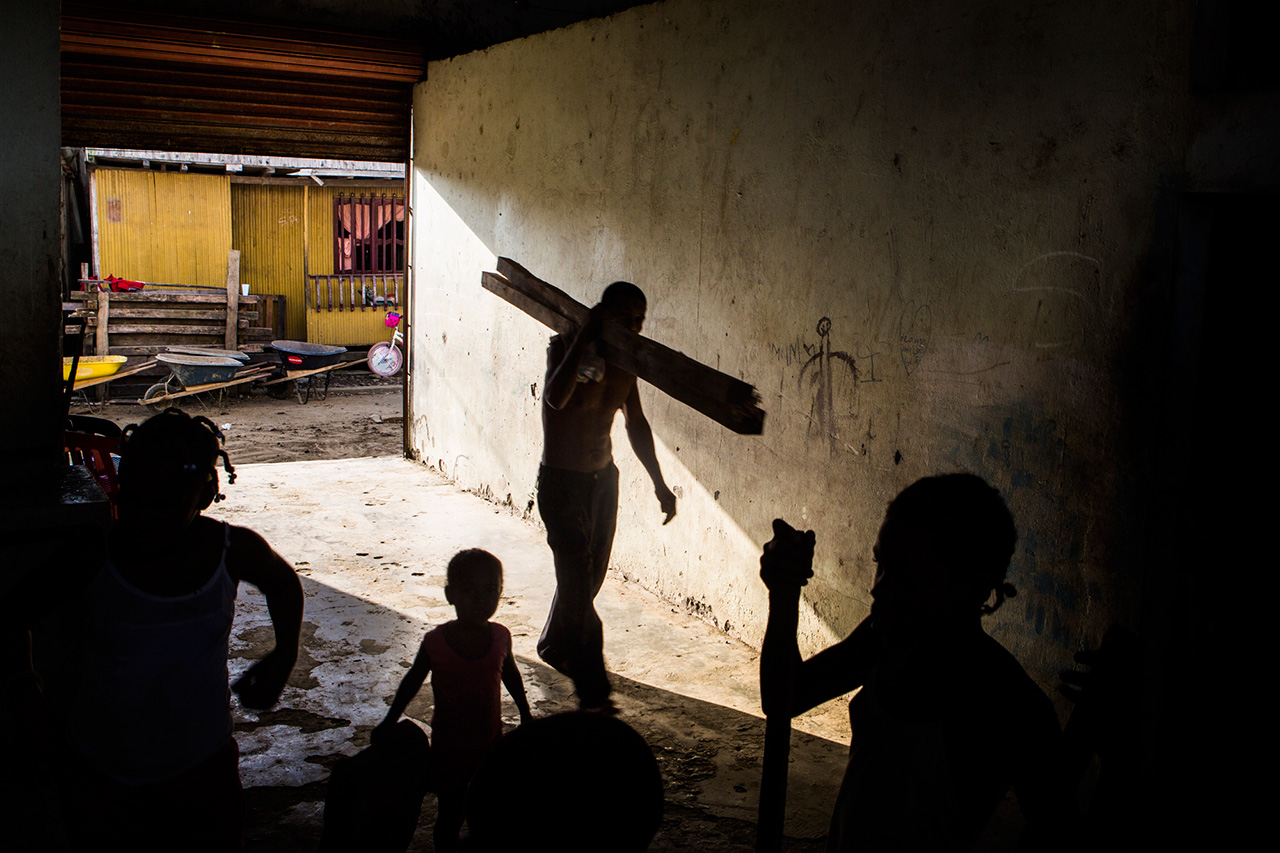 Internally displaced persons from the Pacific region of Colombia. Many of them have fled their homes due to the violence and have never returned. The memory of what happened is too painful and fear still accompanies them. 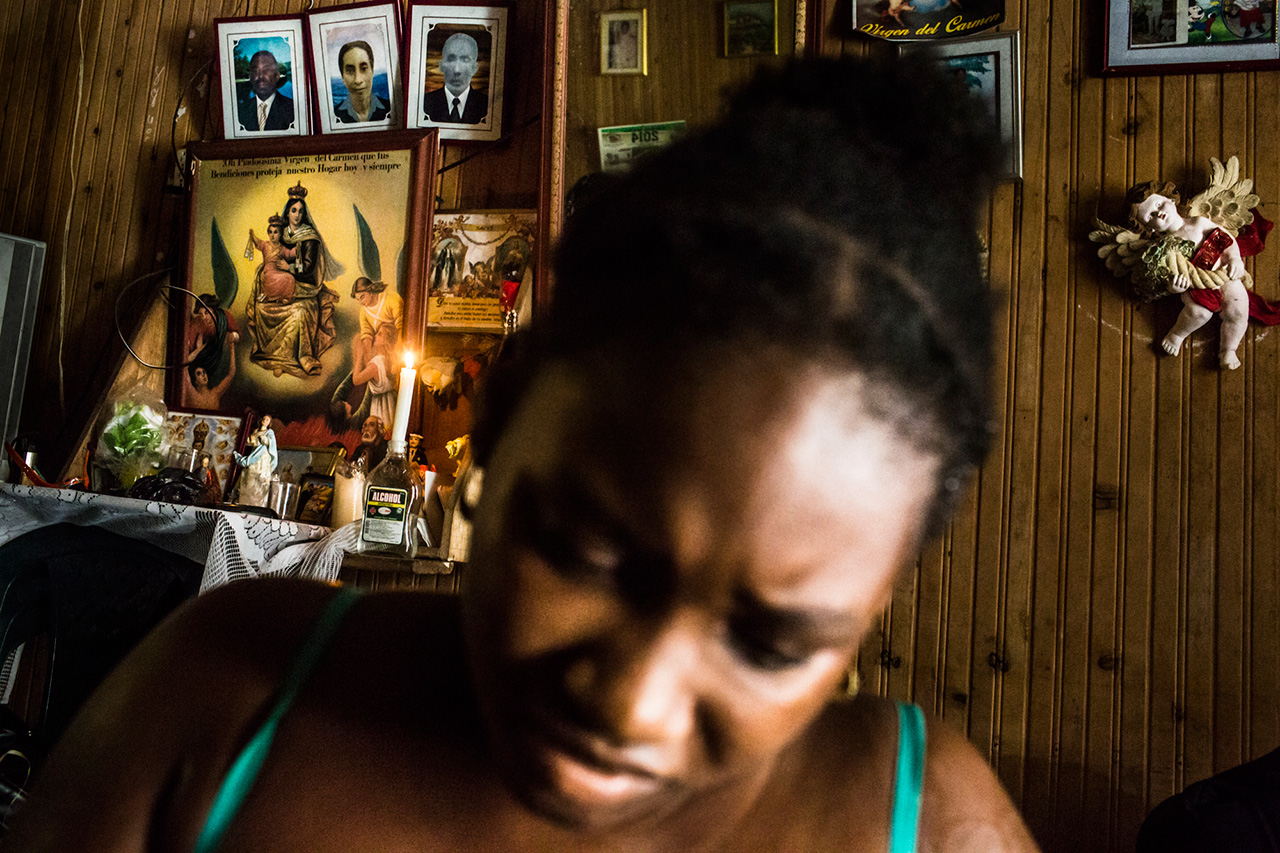 A grandmother cures the stomach pain of a girl with herbs, alcohol and prayers. The belief in traditional medicine is strong and doctors are rare in remote regions of the country. 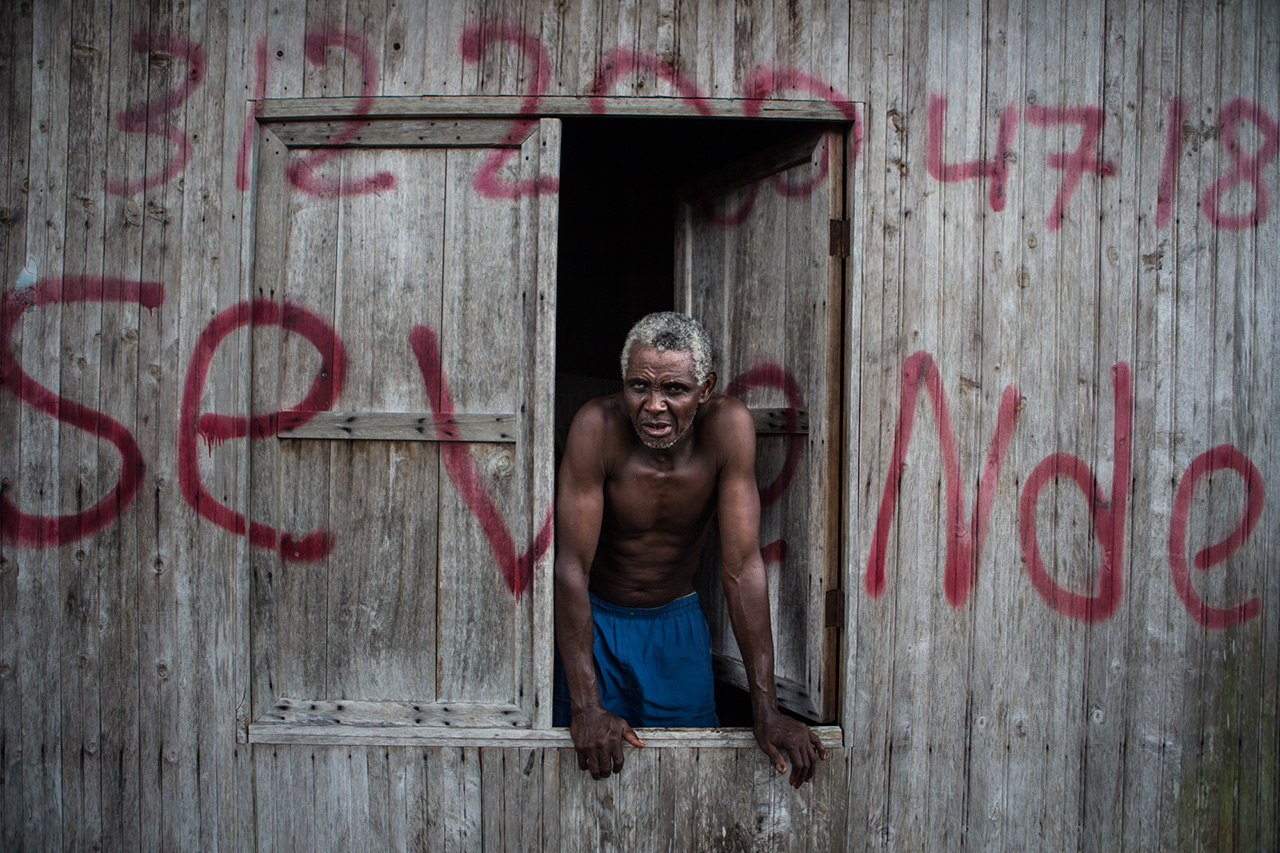 “Will there be a buyer?” Because of the lack of commerce and the large distances to markets, the economy in many places in the countryside very limited.

According to the United Nations, Colombia has the second highest number of displaced people in the world, after Syria. Despite a reduction in military activity during recent peace negotiations between the government and the guerrilla movement the FARC, the social and humanitarian emergency is ongoing. So far, close to 6 million people have fled their homes, 137.000 of them in 2014. These figures show that democracy and the rule of law are limited to the large cities and rarely reach the countryside, having as a result an increase in inequality.

This photo series is a portrait of the life in the countryside and the outlying rural areas of Colombia, taken in different towns of the departments of Nariño, Antioquia and Cauca. The series doesn’t focus on a specific place, nor in one of the many stories of abandonment and resilience that are part of daily life in the Colombian countryside. As a whole, it is a personal view of the life of people living in this area, a life full of challenges and fortitude despite more than fifty years of internal conflict.

Jonas Wresch (Germany, 1988). He studied documentary photography at the University of Applied Sciences in Hannover, was a contributor at the Eddie Adams Workshop in 2014 and is a member of the Cartel Collective and Focus Agency. His personal projects focus on representing social issues in Latin America and Europe. He has received awards in the China International Photo Competition (CHIPP), Pictures of the Year Latin America (POY LatAm) and the Mark Grosset Prize (France). He resides since five years in Colombia and working in Latin America.