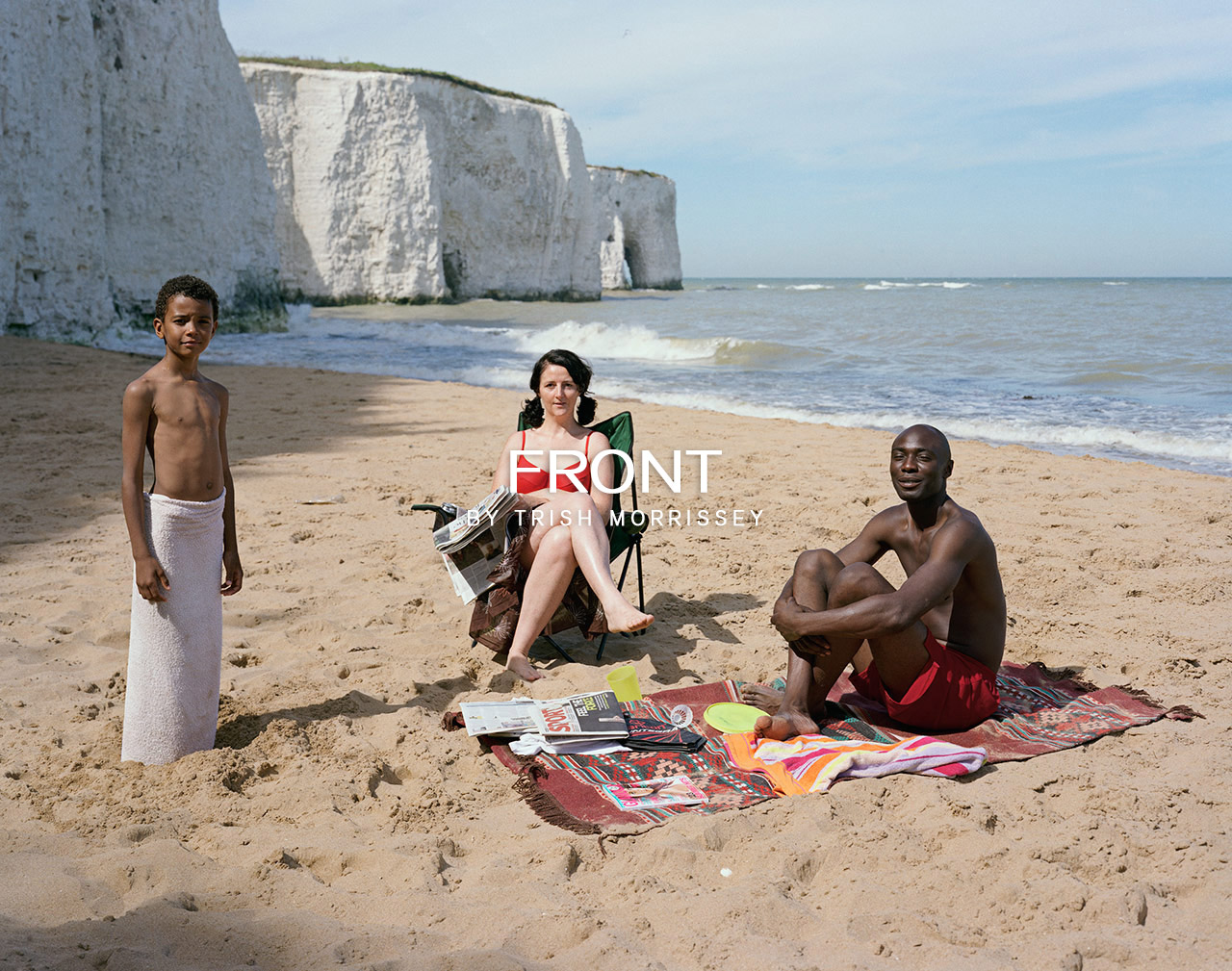 Front (2005-2007) deals with the notion of borders, boundaries and the edge, using the family group and the beach setting as metaphors. For this work, the artist travelled to beaches in the UK and around Melbourne. She approached families and groups of friends who had made temporary encampments, or marked out territories and asked if she could be part of their family temporarily. Morrissey then took over the role or position of a woman within that group - usually the mother figure. She asked to take her place, and to borrow her clothes. The woman then took over the artist's role and photographed her family using a 4x5 camera (which Morrissey had already carefully set up). While Morrissey, a stranger on the beach, nestled in with her loved ones. These highly performative photographs are shaped by chance encounters with strangers, and by what happens when physical and psychological boundaries are crossed. Ideas around the mythological creature the 'shape shifter' and the cuckoo are evoked. Each piece within the series is titled by the name of the woman who Morrissey replaced within the group. 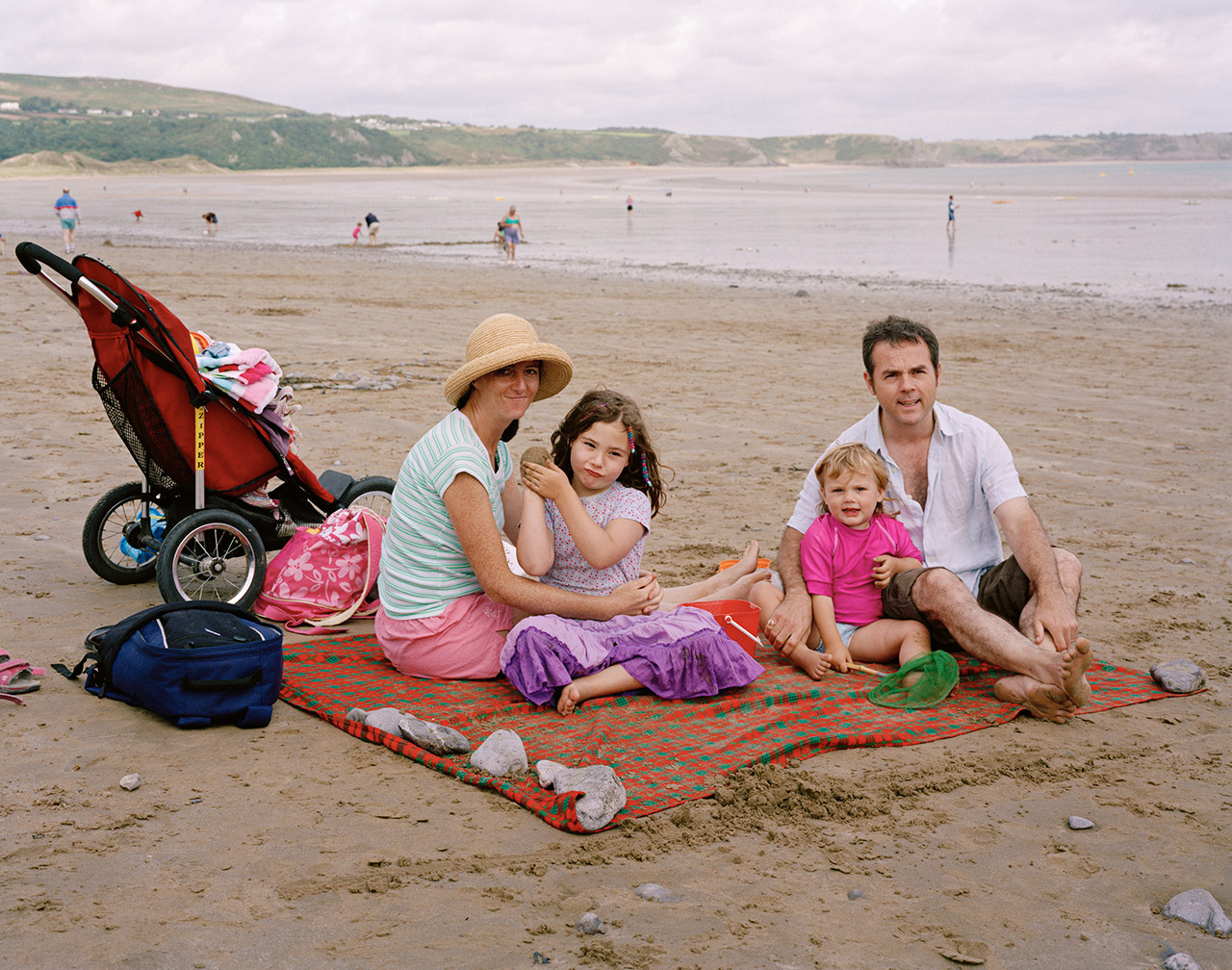 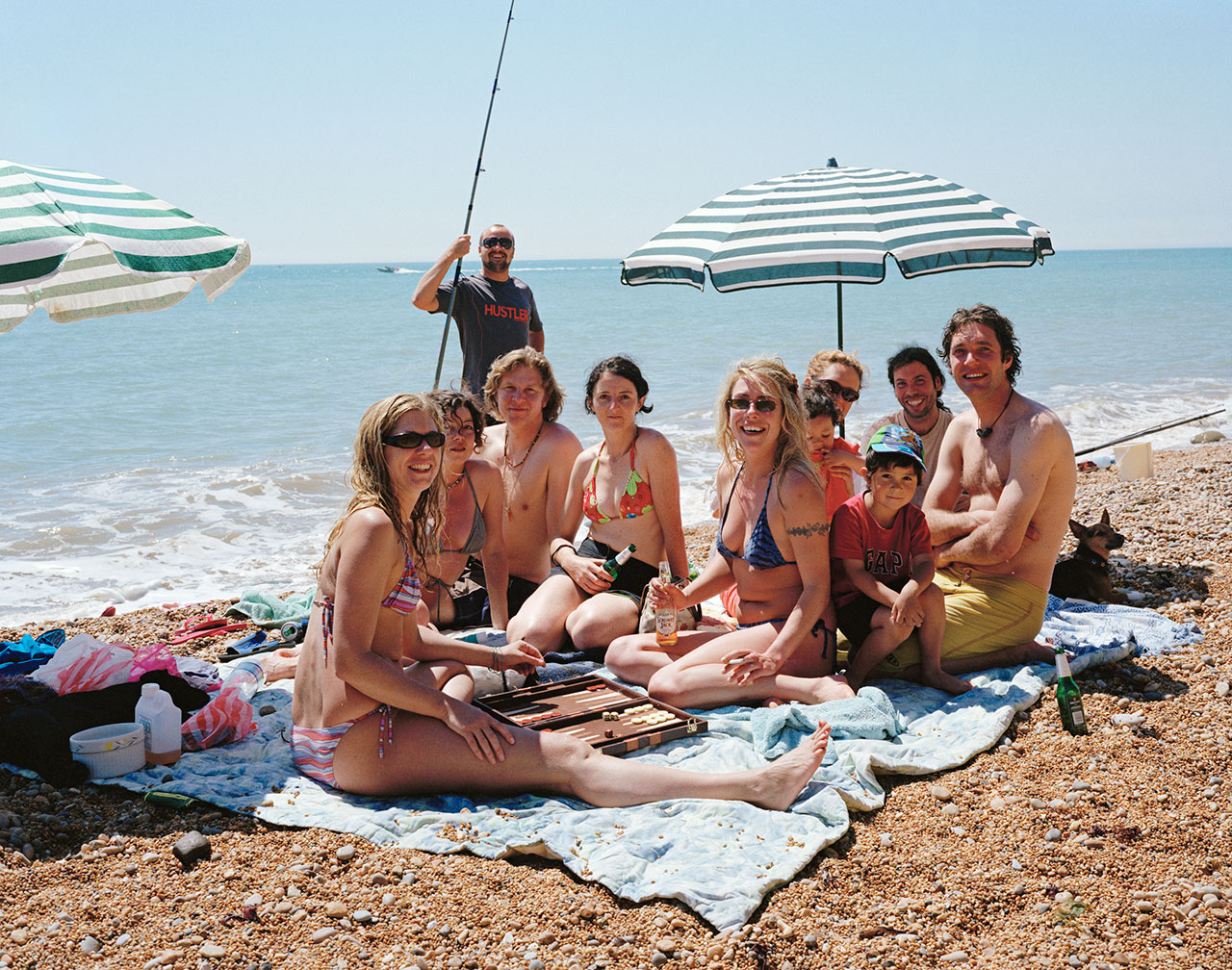 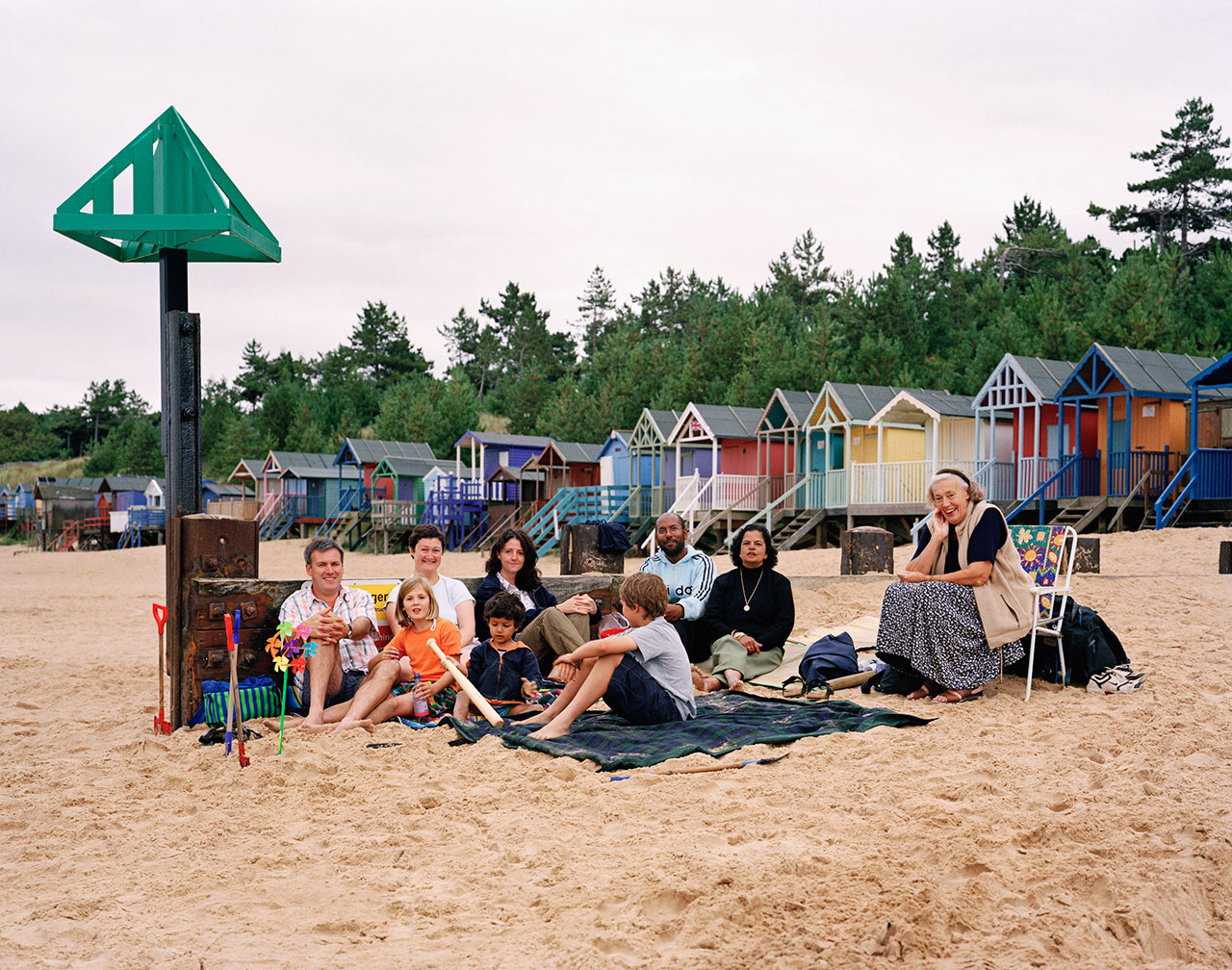 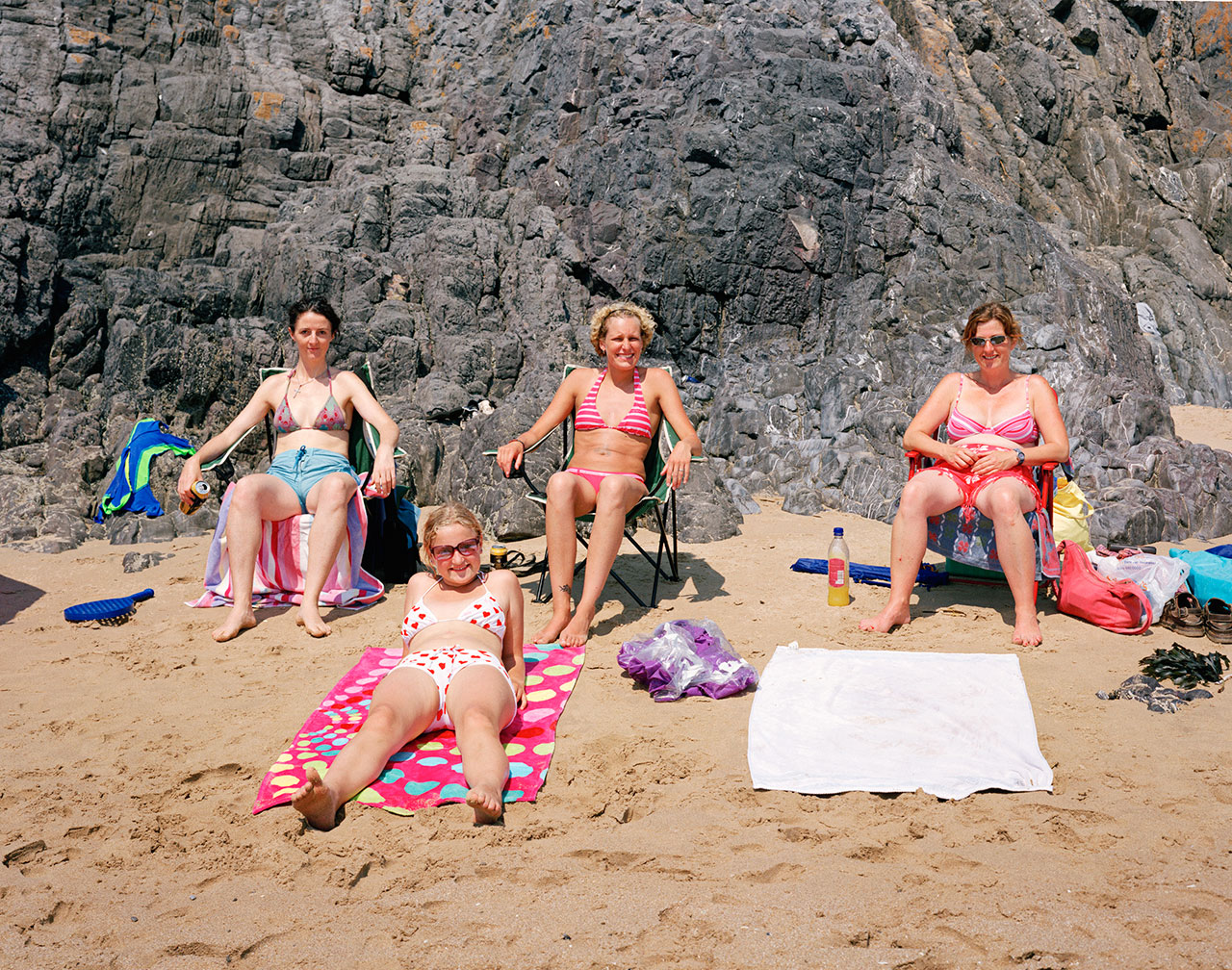 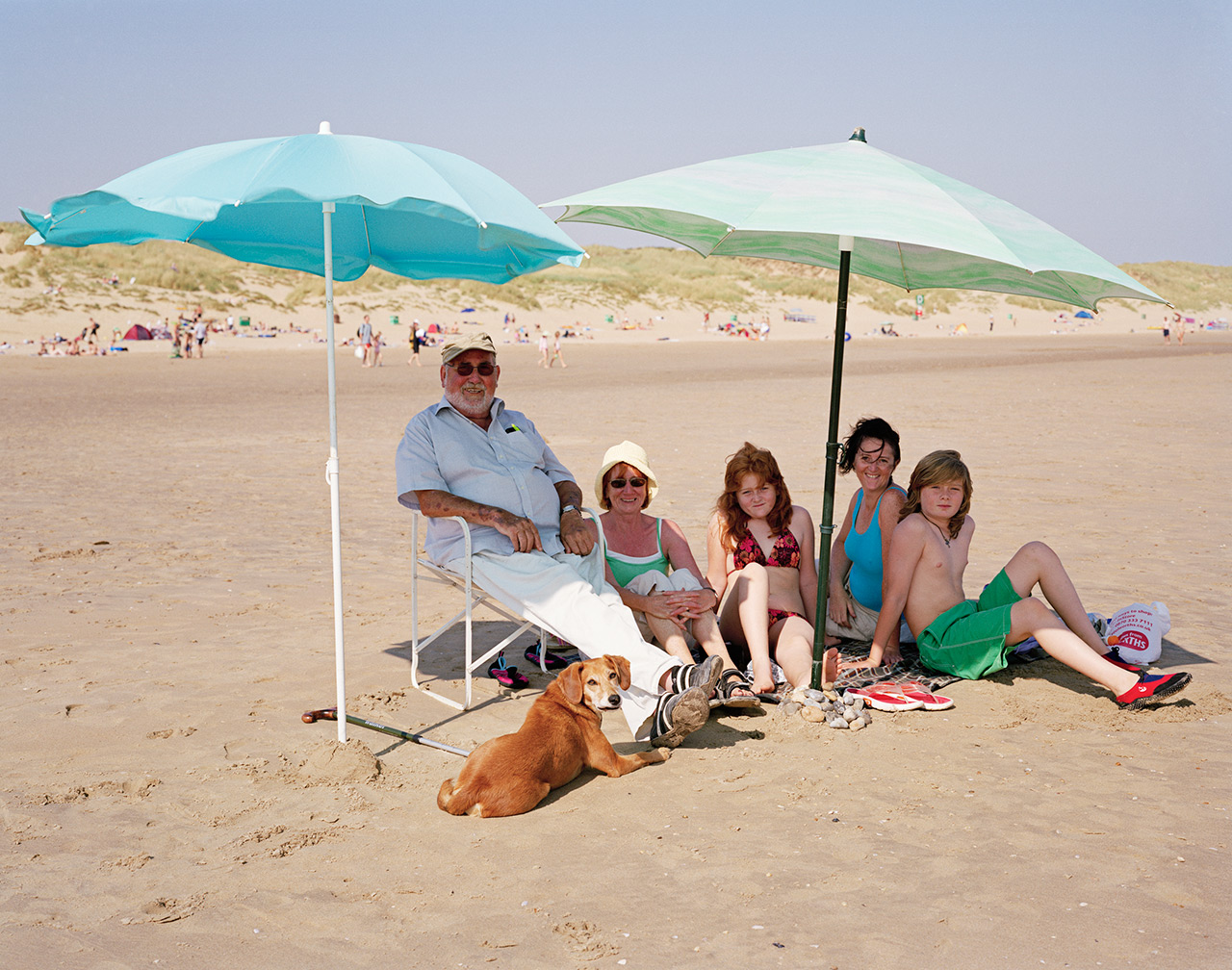 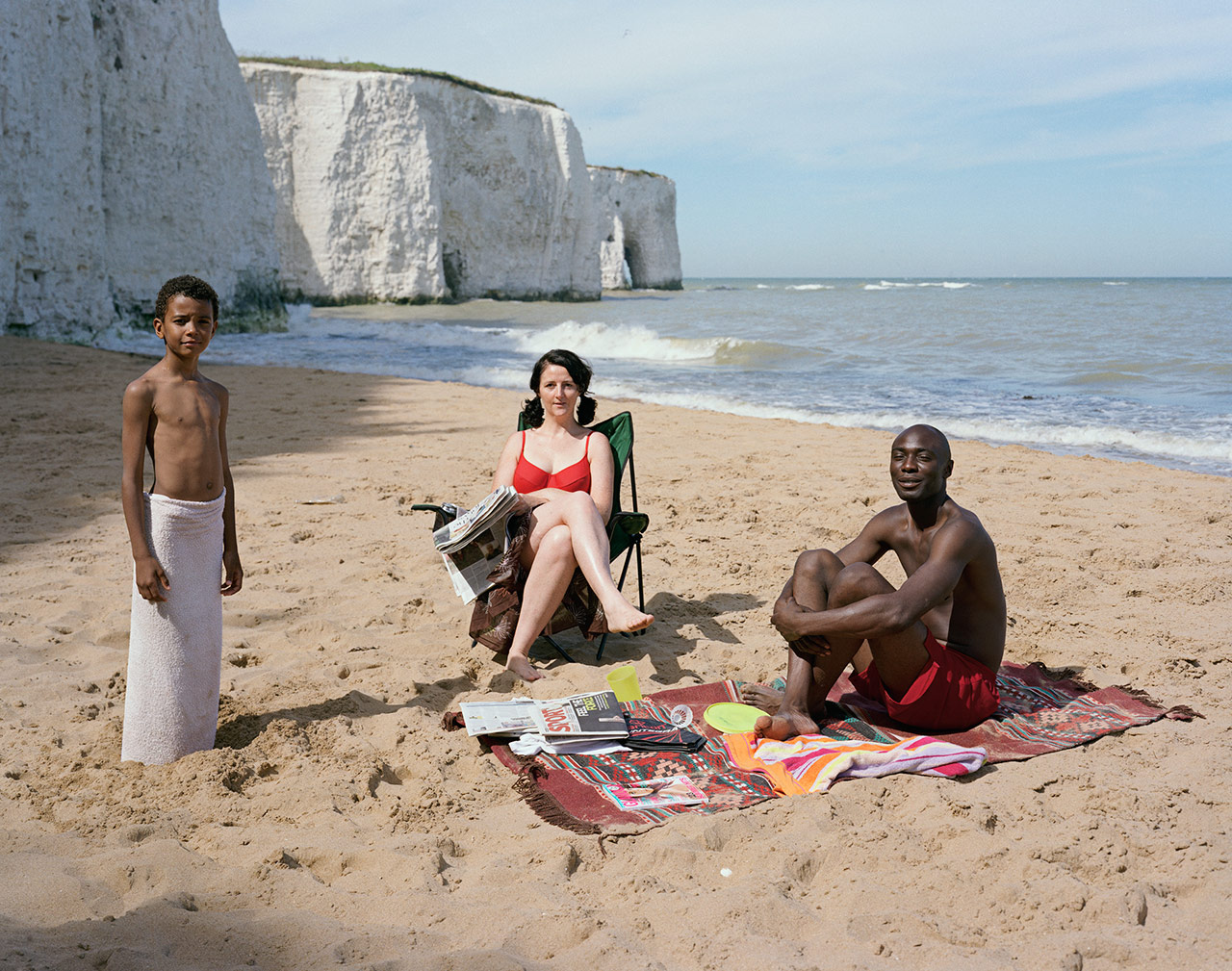 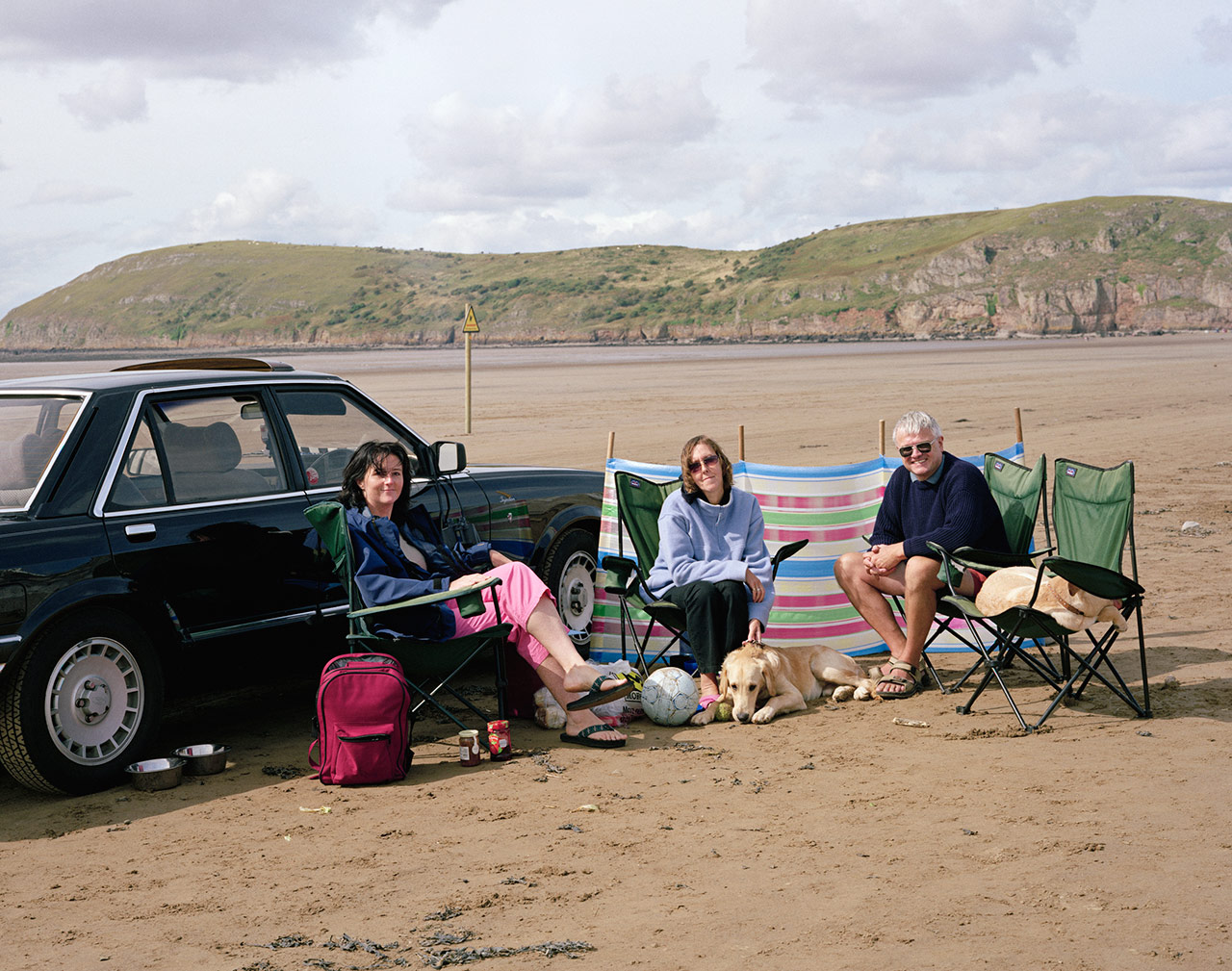 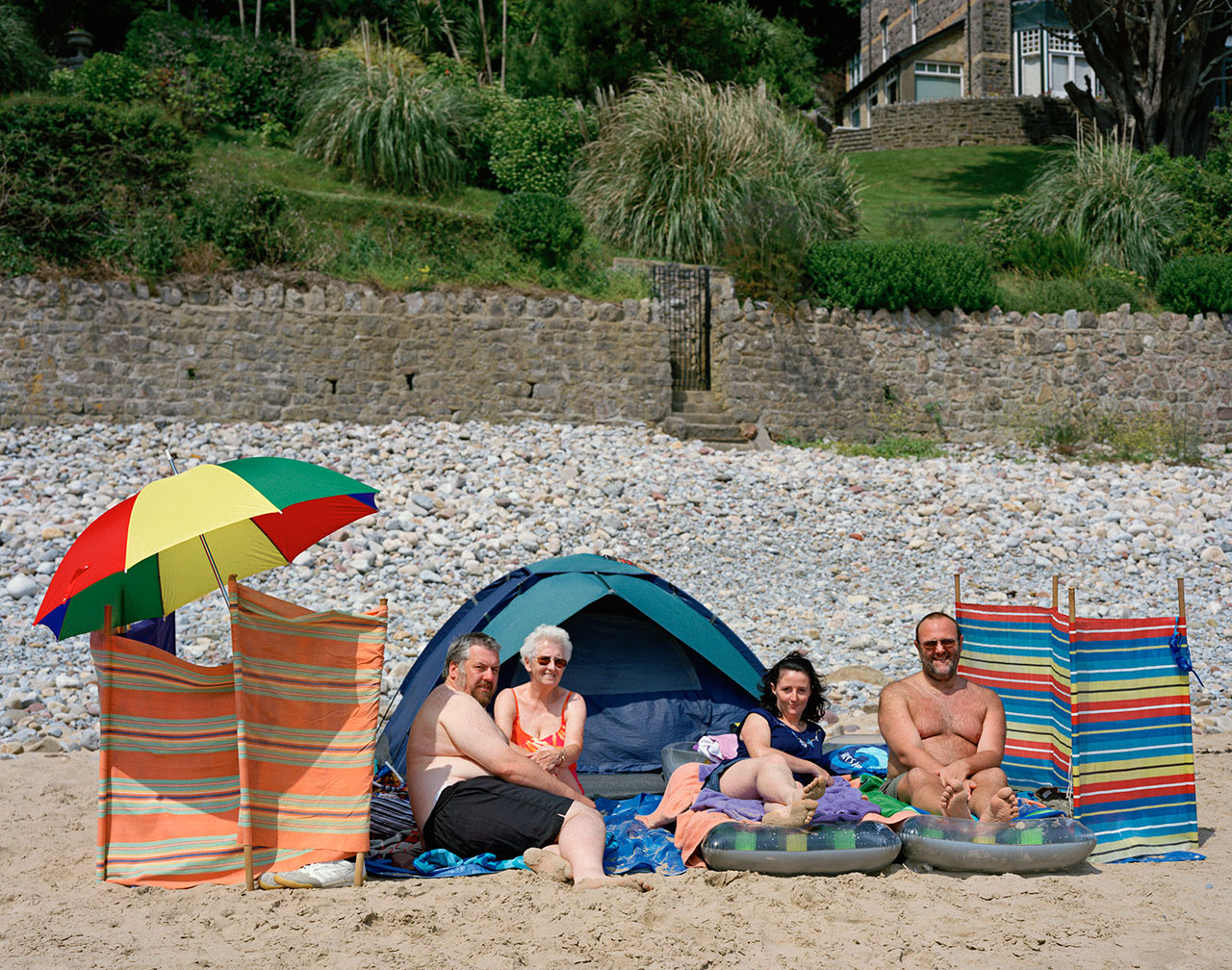 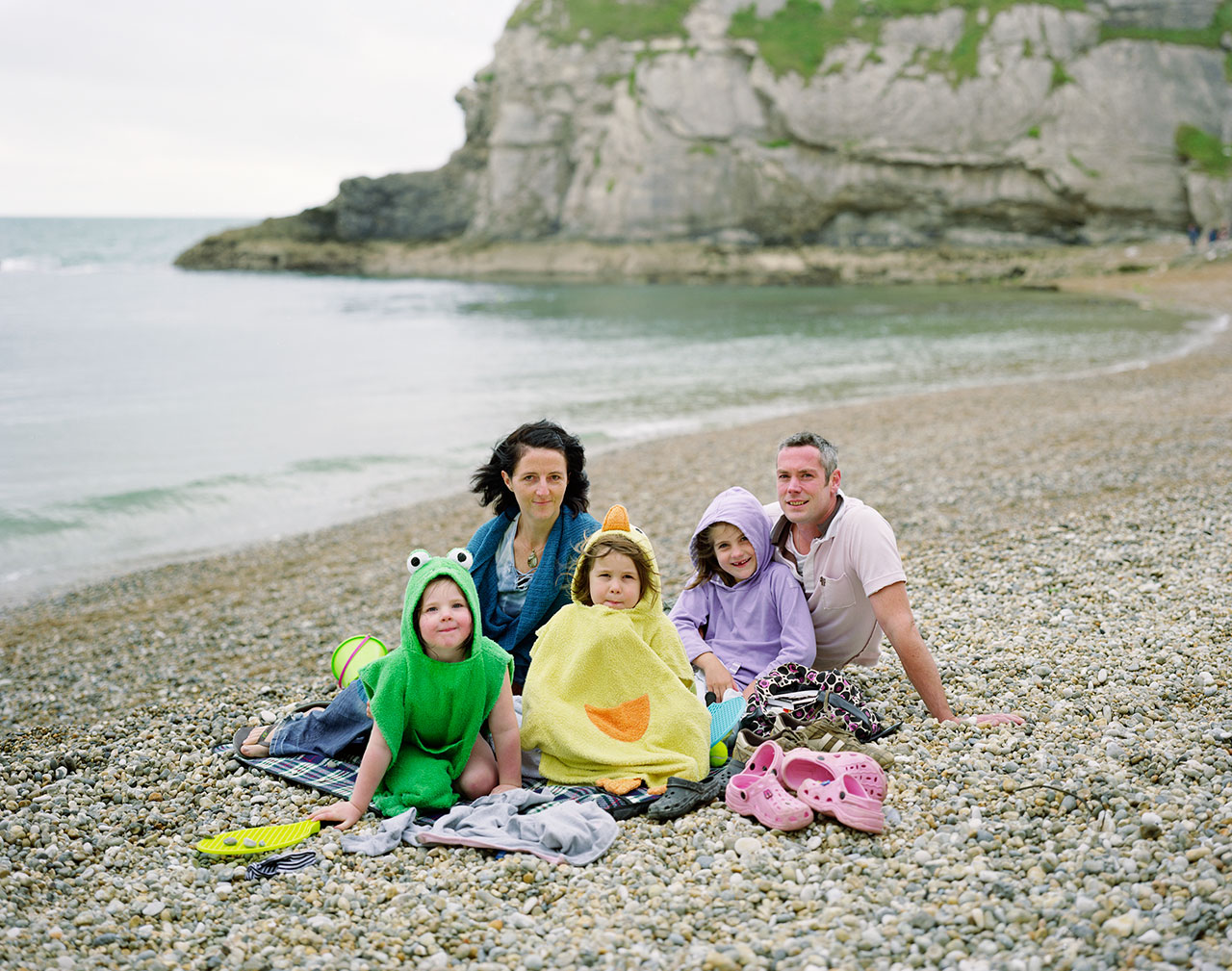 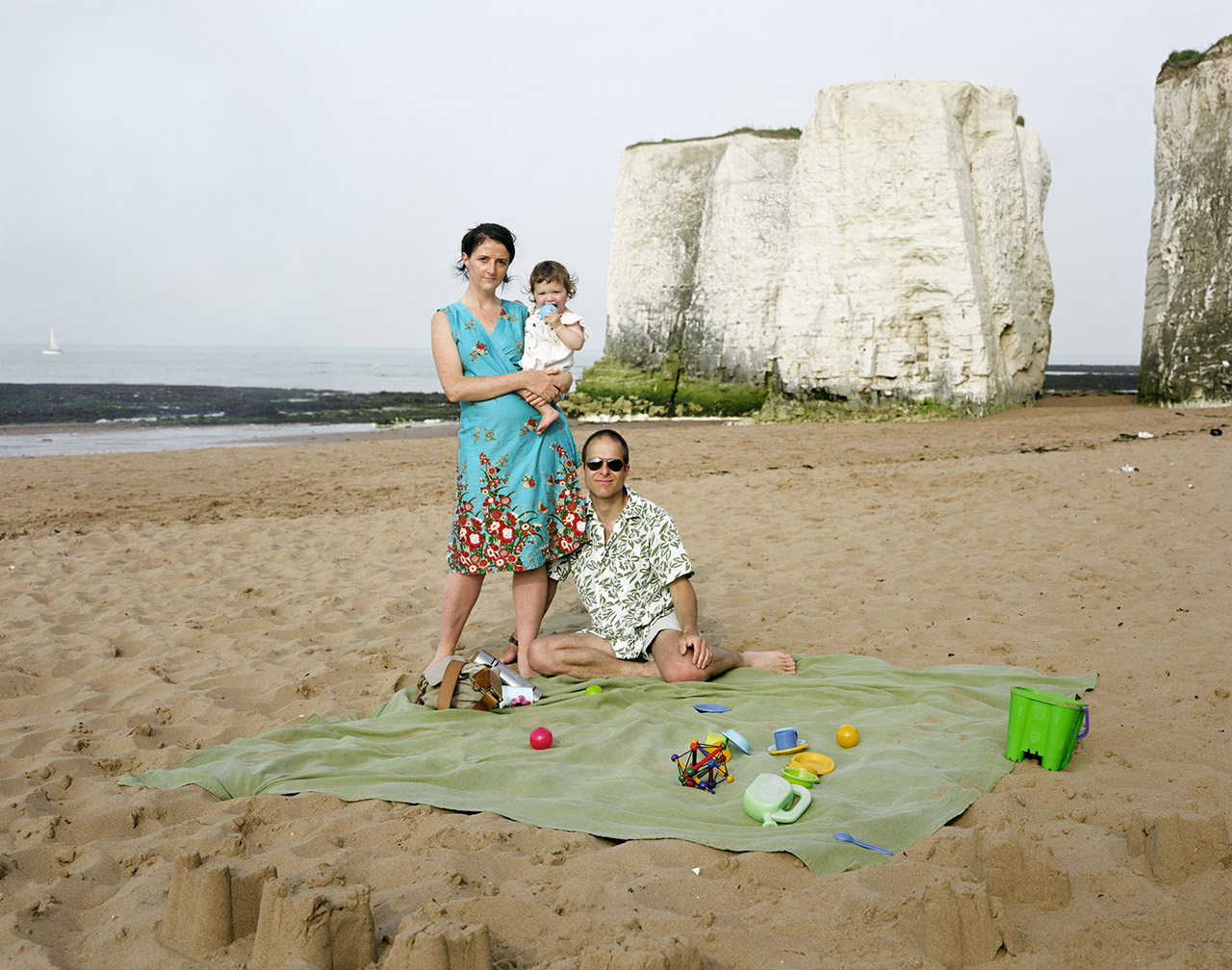 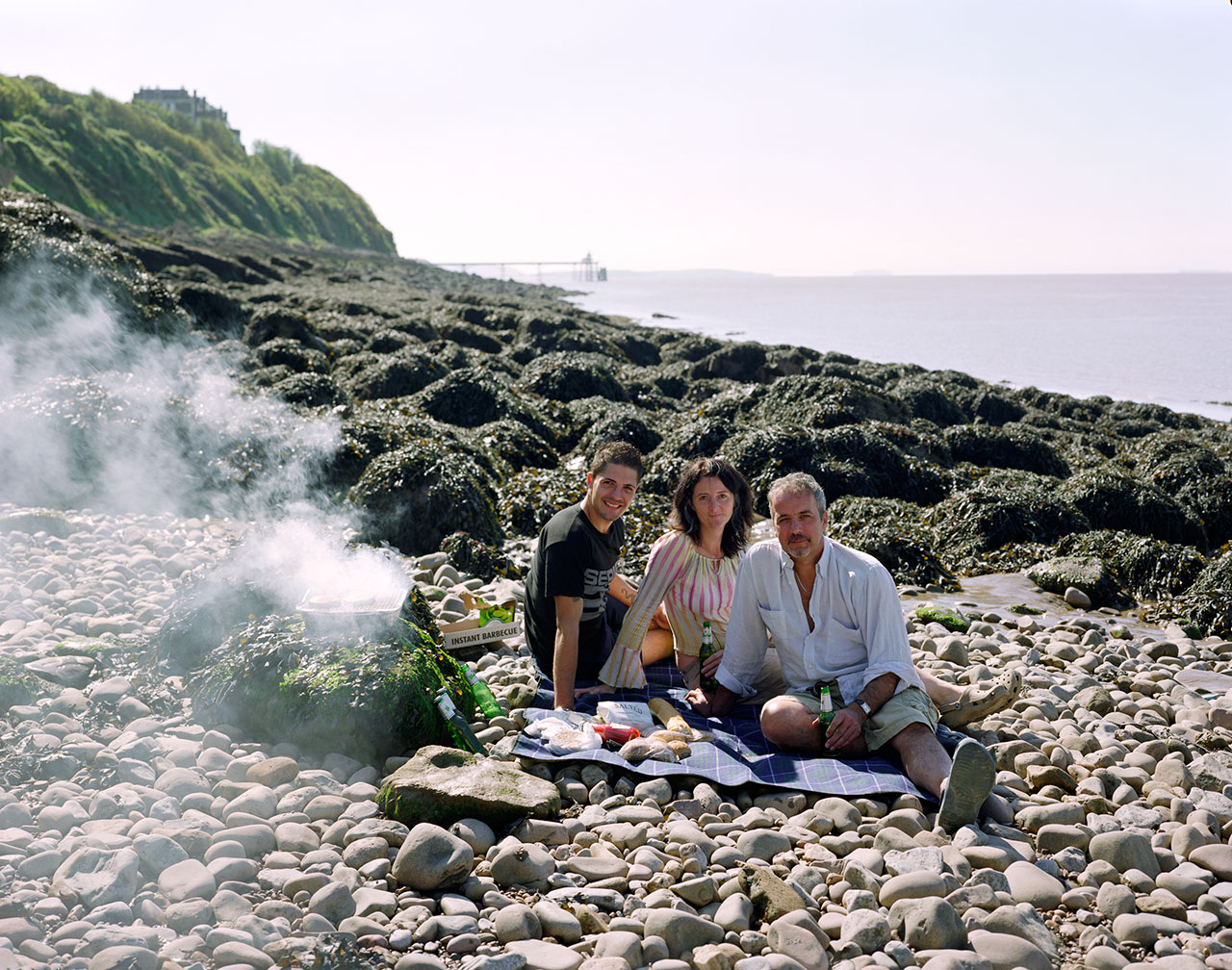 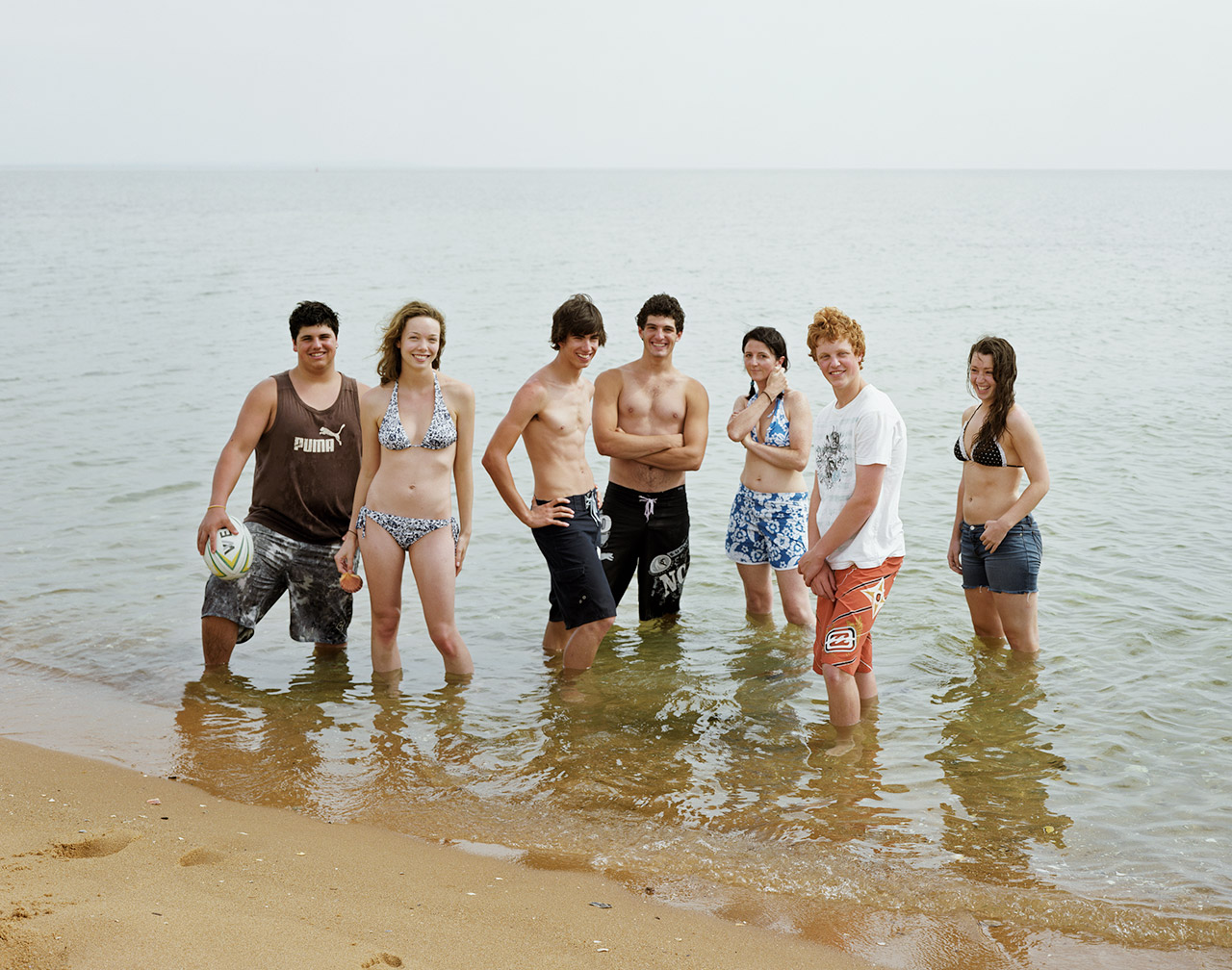 Trish Morrissey (Ireland, 1967). Lives and works in Dublin. She received a master´s degree in Photography from the University for Arts, London (2000-2001). She works with photography, film and video. She has participated in exhibitions around the world, including solo shows at Impressions Gallery, Bradford, UK; Pumphouse Gallery, London, UK; Yossi Milo Gallery, New York, USA; Gallery of Photography, Dublin, Ireland; and the Centre for Contemporary Photography, Melbourne, Australia. To see more of her work go to: trishmorrissey.

ZZ. In the project Front you assume very diverse roles. How was it to adopt these different roles and to integrate yourself in such a way as to go unnoticed?

TM. The work was made over a 2 year period in which I became pregnant and had my first child, so my body shape was in constant flux.  The period where I was obviously pregnant was over the winter, so no beach shots could be done, but I gained and lost 20kg (really!) which meant that my face changed a lot as well as my body.  I think this helps the viewer assume they are seeing a different person in each picture on first viewing.  It usually takes a while for them to realise it is the same person in each image.  I also think that the language of photography is very familiar to everyone, even on a subconscious level.  So when presented with a picture of 'a family' we have no reason to think that the photograph is anything else.  People even see 'family resemblance' in these photographs where there is none.  I also realised fairly early on in the process that in order to get people to receive my request to be part of an art project about families positively, I needed to already look like I was part of their tribe before I even approached them.  If I didn't, then they usually rejected my request.  So on my beach trips, I always carried a large bag of clothes.  I would scout the beach quietly and pick a family who I wanted to work with, then change my clothes so that I would fit in before I approached them.

ZZ. Which aspects of your own identity do you find in each representation that you do of another person?

TM. I think it is no coincidence that I was newly pregnant when I started this project.  In some ways, subconsiously I was 'trying on' motherhood, or in the pictures of groups of friends, I was imagining how life might carry on if I did not become a mother.

ZZ. Do you seek to provoke something in particular when you take people out of their context and replace them? How did people react to seeing themselves being replaced by you and to observe their lives from a distance, without them being present?

TM. I am using the beach as a metaphor for borders, boundaries and edges.  The family unit has both physical and psychological boundaries, the beach is the border between culture and order (the land) and nature and chaos (the sea).  By asking to be photographed with the family, and for the mother to come out of the picture and become the photographer, I am disrupting this boundary.  It was a very strange feeling for the woman to do this, and I think because I was asking people who were more or less my own age and because I am a woman (I don't think a man would have the same success asking to be the father figure in the picture, and asking the man to step away from his family) and we had a rapport, the pictures were possible.  One woman said 'Oh my God, it is as if I have died and my husband has a new wife!)