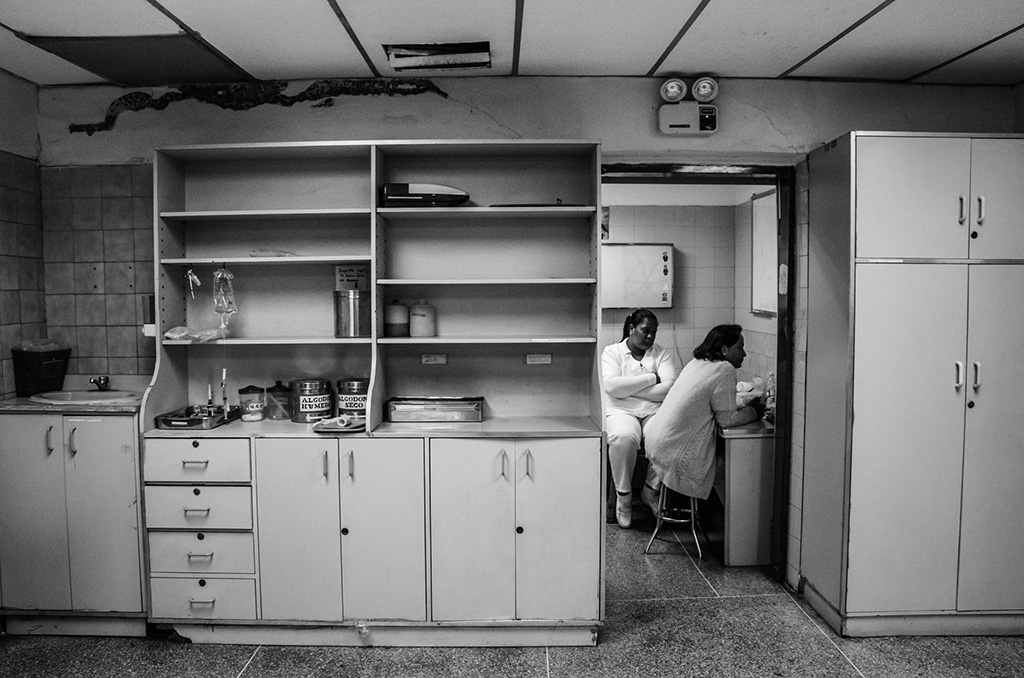 Empty shelves where medical supplies should be, at the government hospital in Petare slum outside of Caracas. Doctors here often turn patients away because they do not have the supplies needed to treat them. 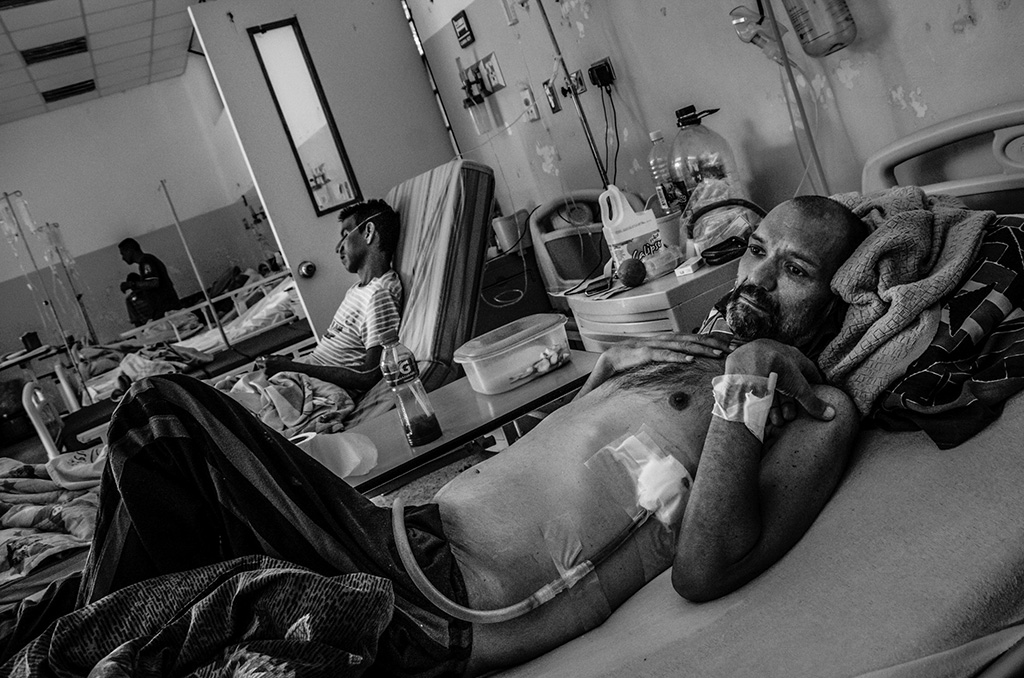 AIDS patient Franco Bigotti rests in a state hospital outside of Caracas.  This year he, along with other patients in the AIDS ward, went three months without their antiretroviral medicines because of shortages. 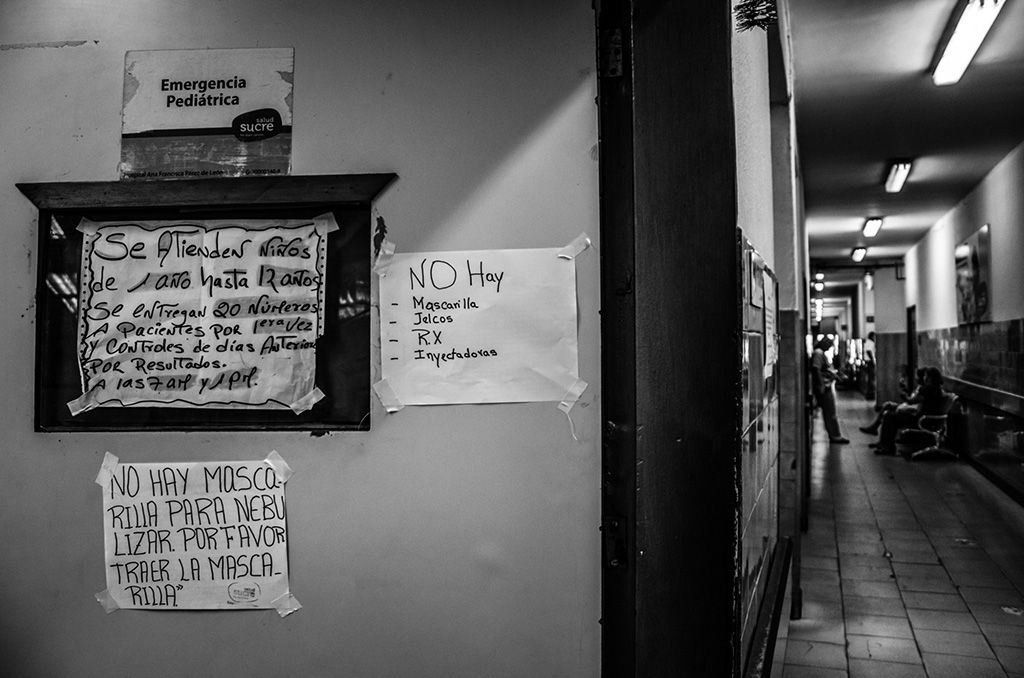 A hand-written sign that lists the medical supplies unavailable in a state run hospital in Petare slum, including: masks, syringes, and X-rays. 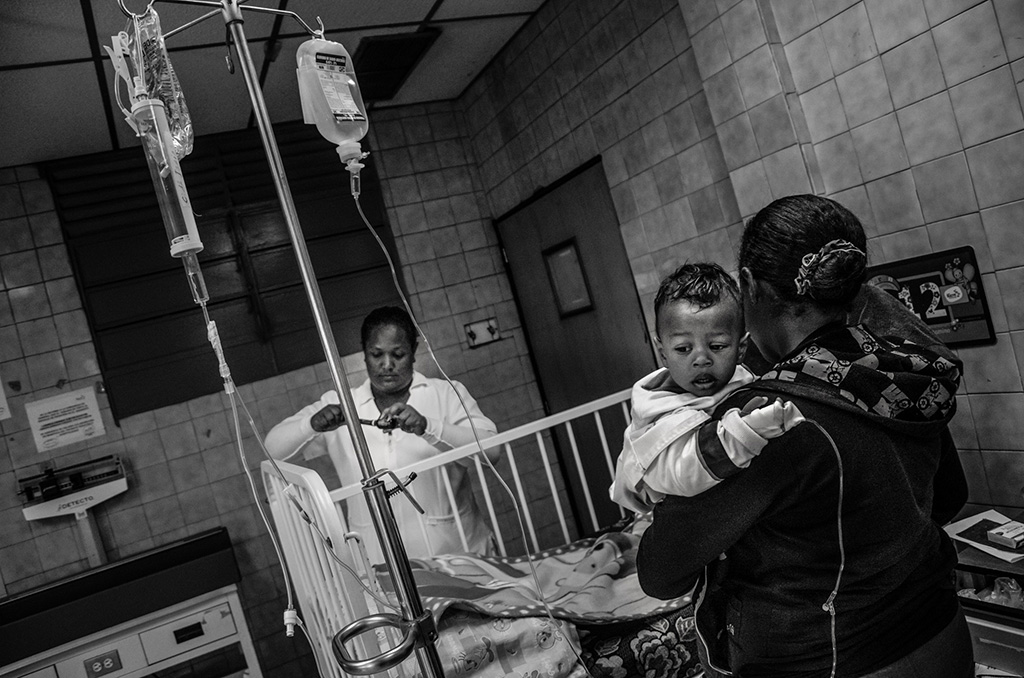 Carmen Ramos holds her 1-year old son, Isoios Jaimez who is suffering from a respiratory infection, inside the pediatric ward of a state hospital. Ms. Ramos has been unable to find the antibiotics prescribed to help him recover. She said she rotates shifts at the hospital with her husband: one takes care of their son, the other waits in lines at pharmacies in search of the medicines they need to cure him. 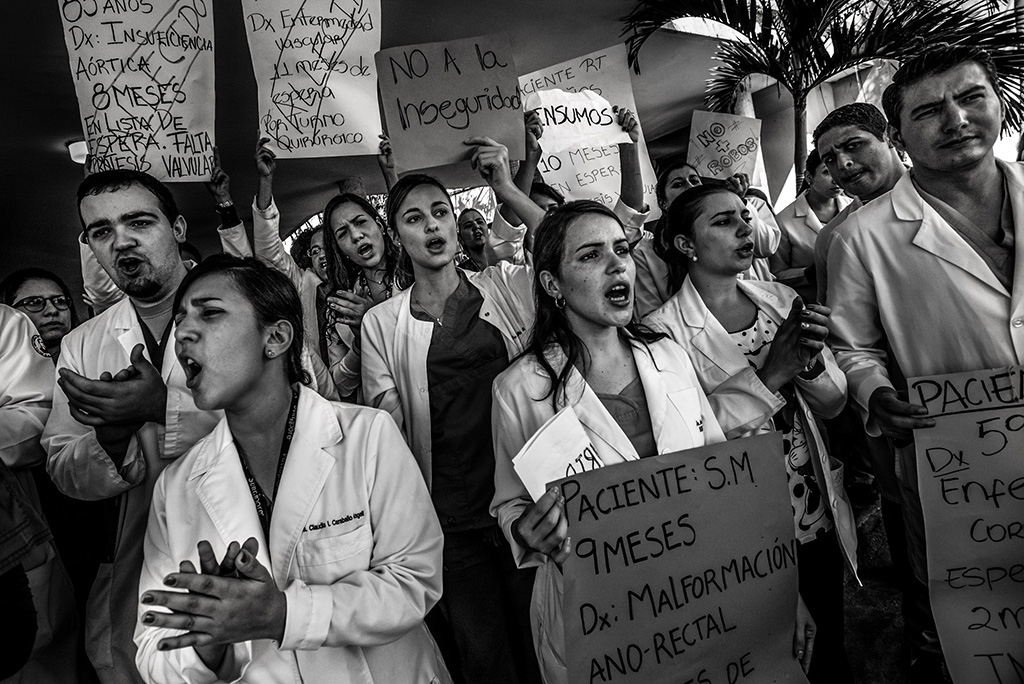 Doctors protest in front of the state-run University City Hospital, because they do not have the medical supplies they need to treat their patients. 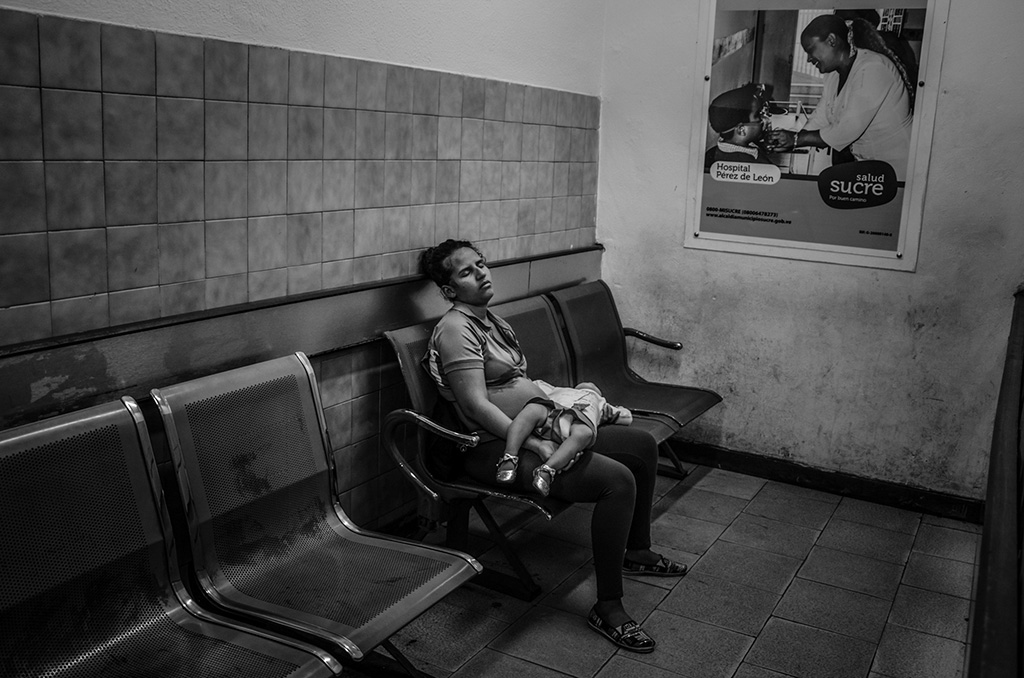 An exhausted mother waits with her daughter to be admitted to the pediatric emergency room of the state hospital in the Petare slum in Caracas. Doctors here say they are working with a bare minimum of supplies, and often have to turn patients away.

When the government health system fails to provide the necessary care, patients have a wide range of alternatives in the search for a cure.

One is travel to Sorte, a sacred mountain in the interior of Venezuela, where the followers of the religion-cult of Maria Lionza believe that through ritual and faith, their God has the power to heal them of their ailments.

Religious leaders say that 24,000 people came to Sorte for its annual pilgrimage for a week in October this year, an increase of 35% over last year. 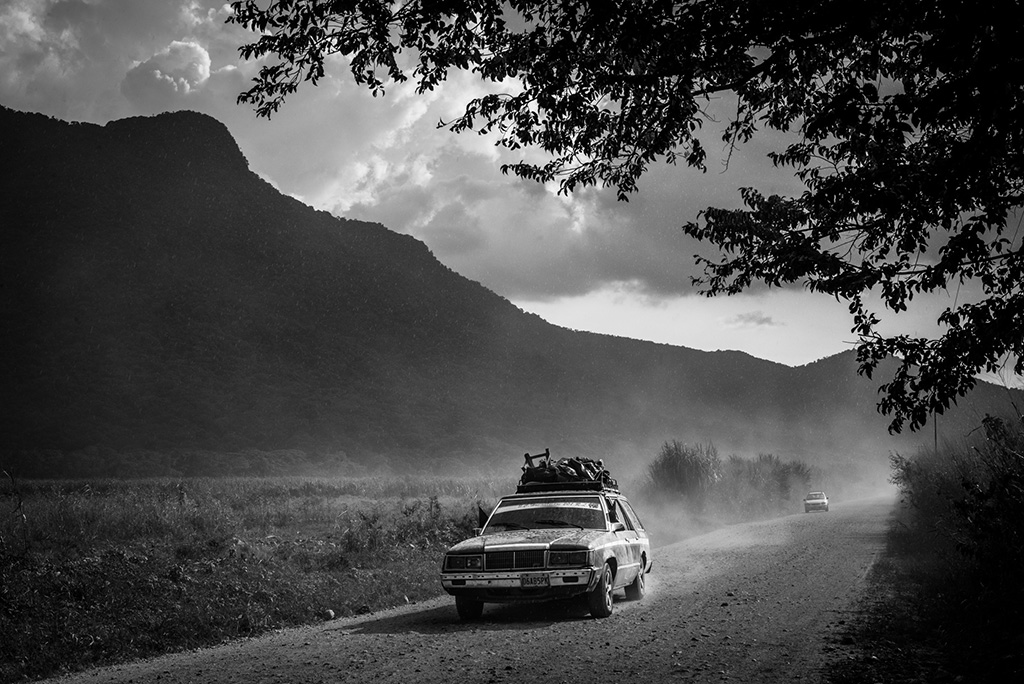 Cars drive along the road to Sorte mountain, seen in the background. 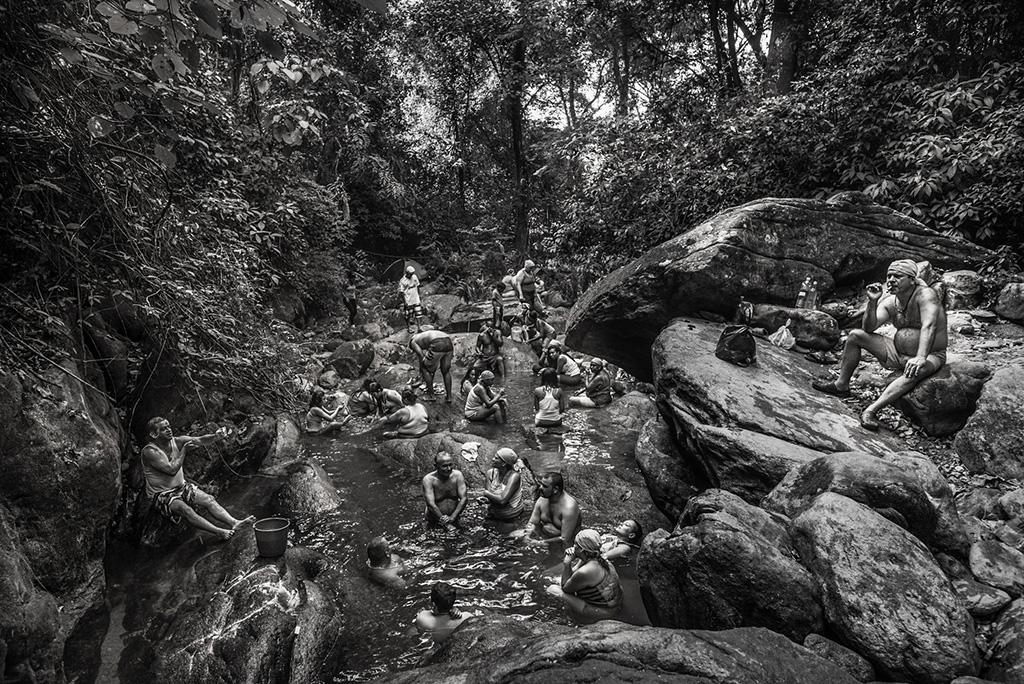 Followers of the Maria Lionza religious cult conduct healing rituals in the pozo medico, a part of the river with an altar to Doctor José Gregorio Hernández, who they believe has special powers to heal the sick. 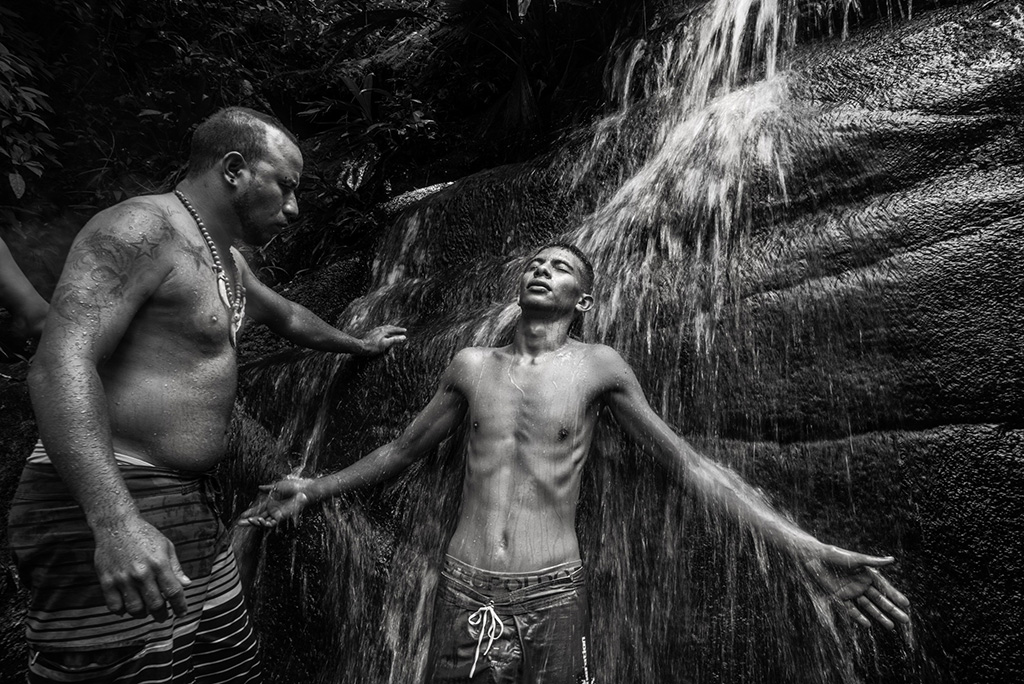 Followers of Maria Lionza conduct rituals under two waterfalls, one with negative energy, one with positive energy, at the pozo de los medios. 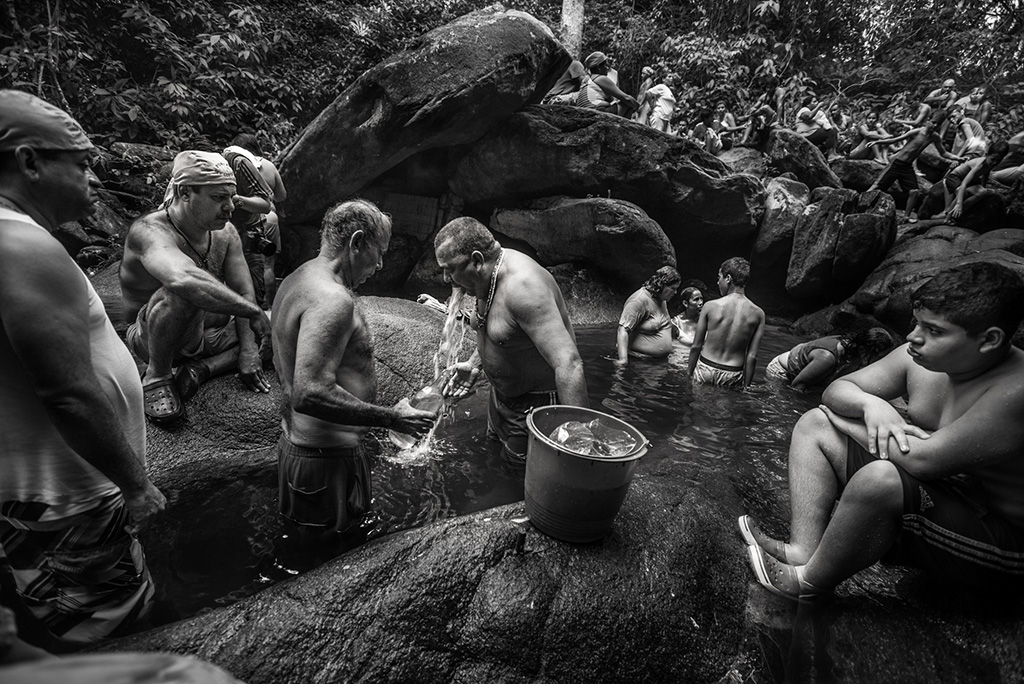 In the waters of the pozo medico, a man with a stomach ailment vomits after a spiritualist instructed him to drink 15 bottles of river water during a ritual to purge him of the negative energy. 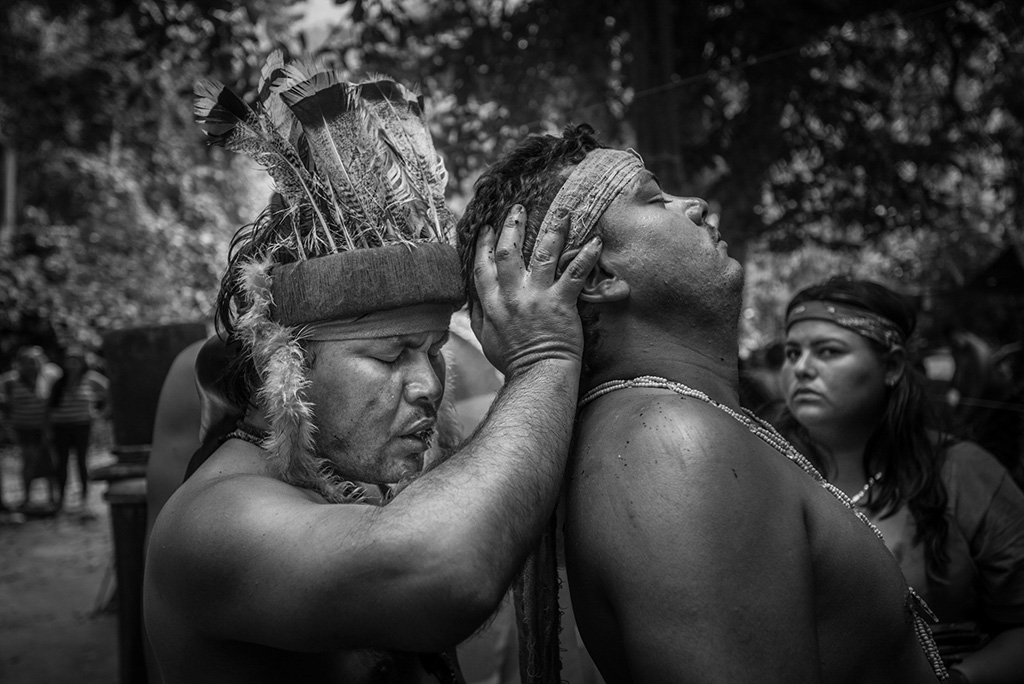 Two men conduct a strength ritual at the base of Sorte mountain. 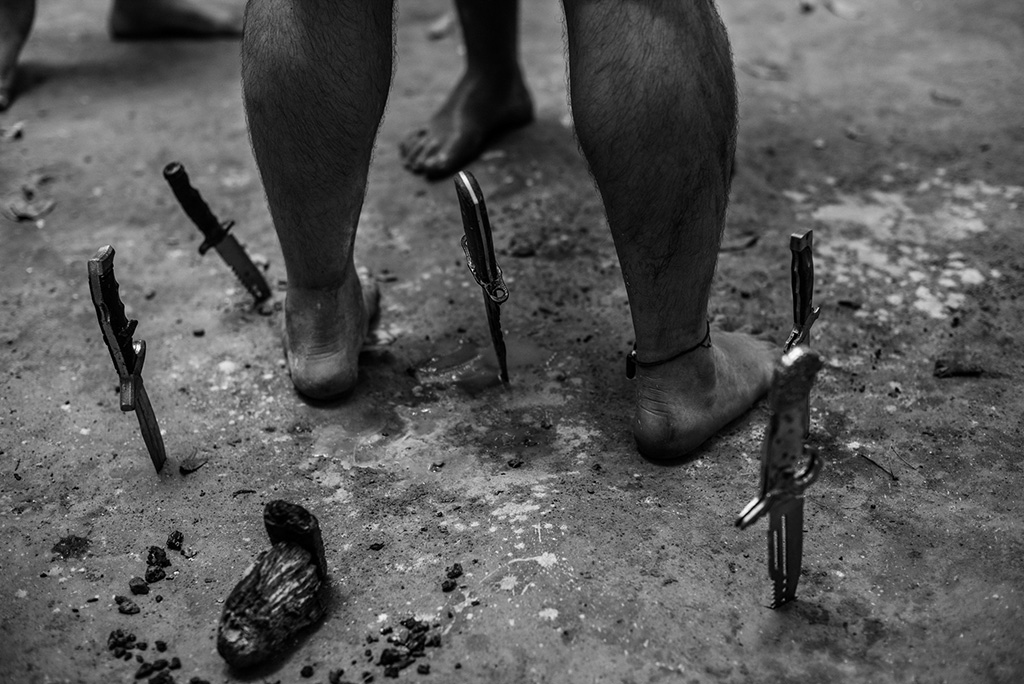 A medium in a trance throws daggers at the feet of a man during a ritual for strength. 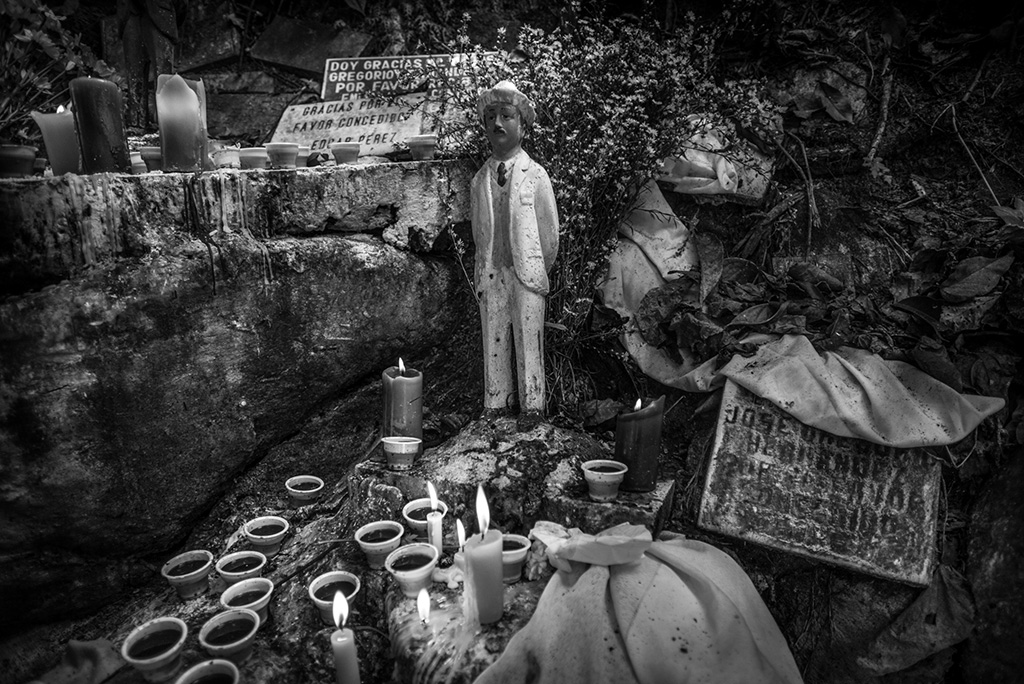 At the pozo medico, offerings of candles and small cups of coffee on the shrine to Doctor José Gregorio Hernández, who they believe has special powers to heal the sick 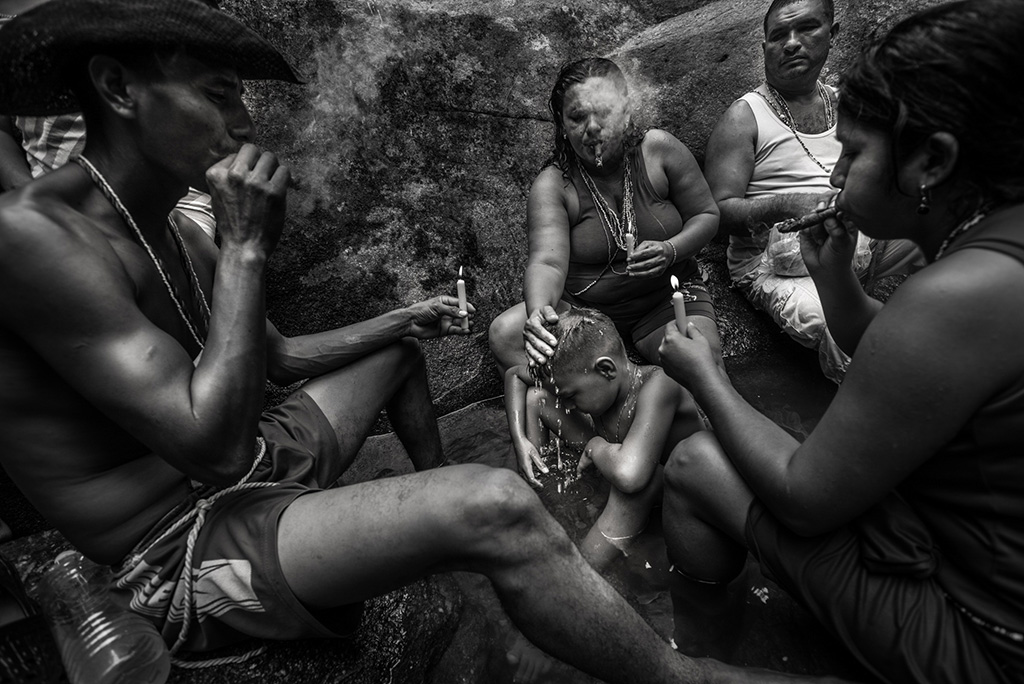 A family conducts a ritual for a small boy under two waterfalls, one with negative energy, one with positive energy, at the pozo de los medios. 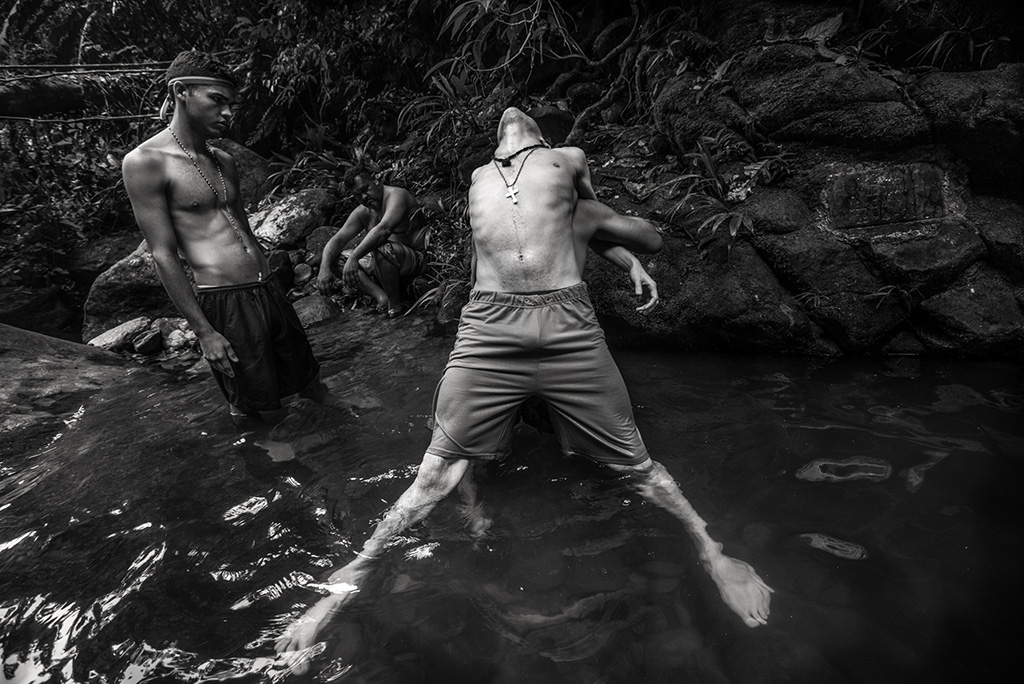 Medium Jose Martin Linares, who claims to have healing powers, lifts Anderson Diaz onto his back, while conducting a ritual channeling the spirit of indian warrior Cacique Urimare in the pozo Cacique Mara. Mr. Linares has treated hundreds of patients. 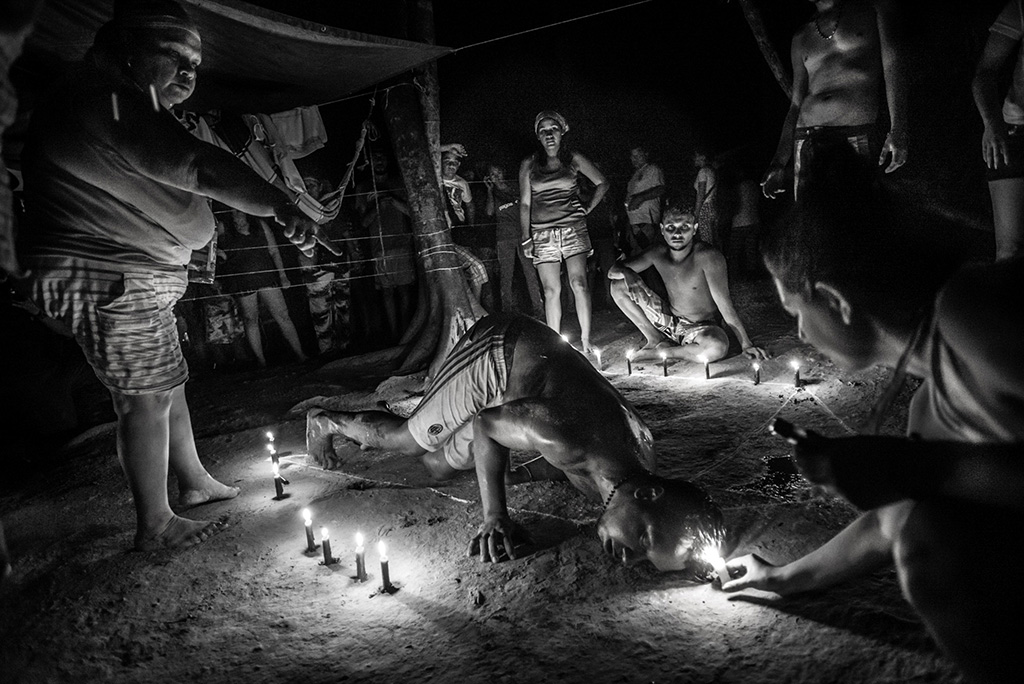 A female medium conducts a healing ritual on her son during a night session. 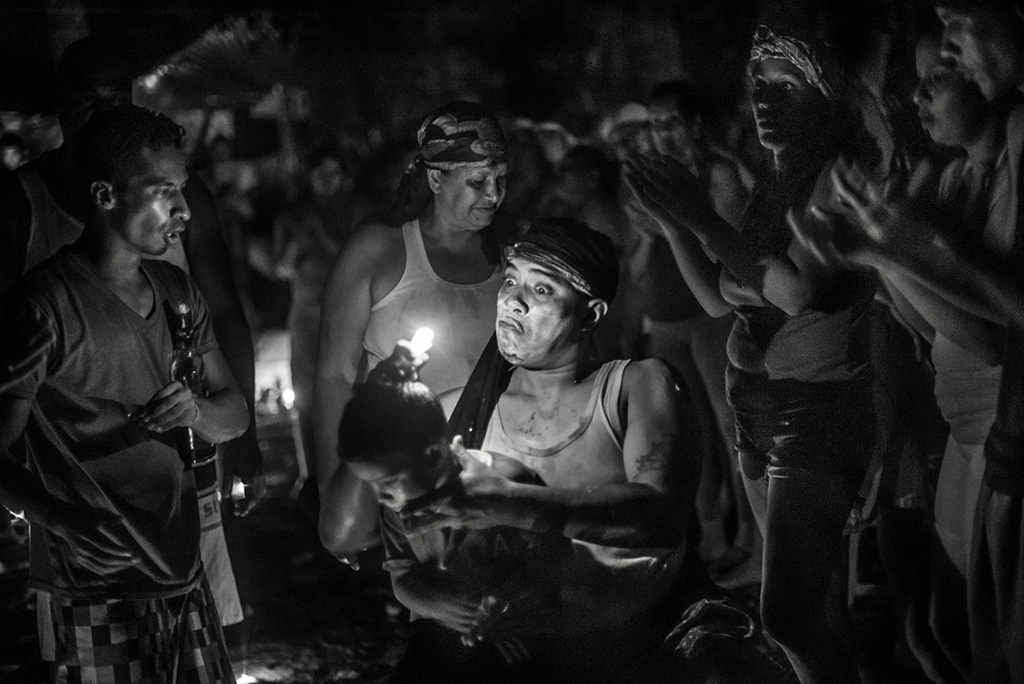 A medium holds a candle flame to the head of a small boy during a night ritual. 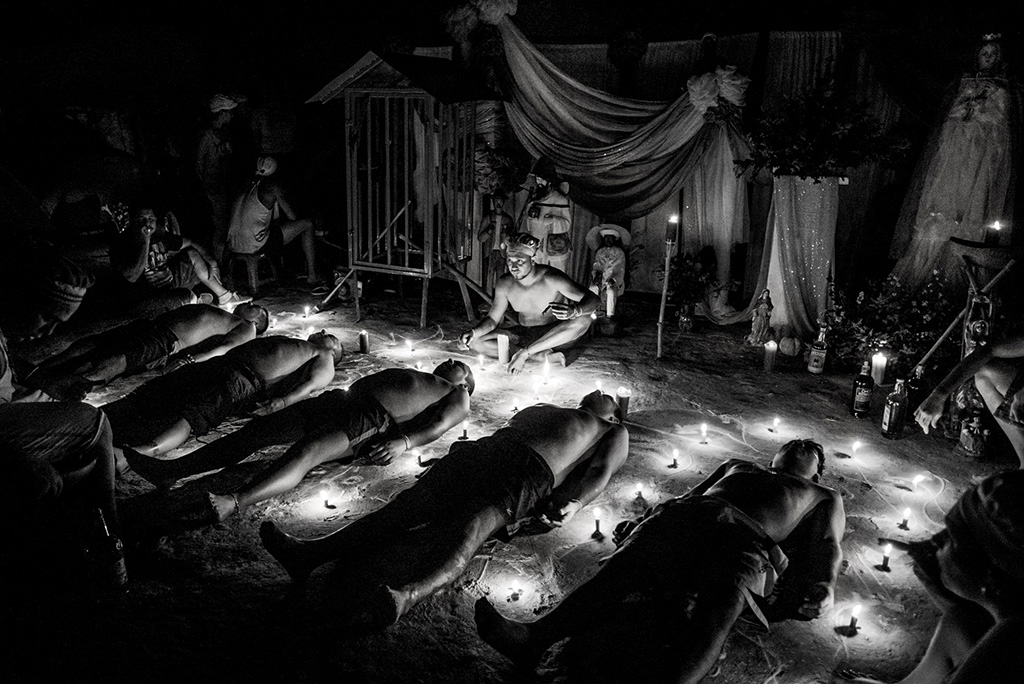 A medium conducts a group ritual in the base of Sorte mountain. 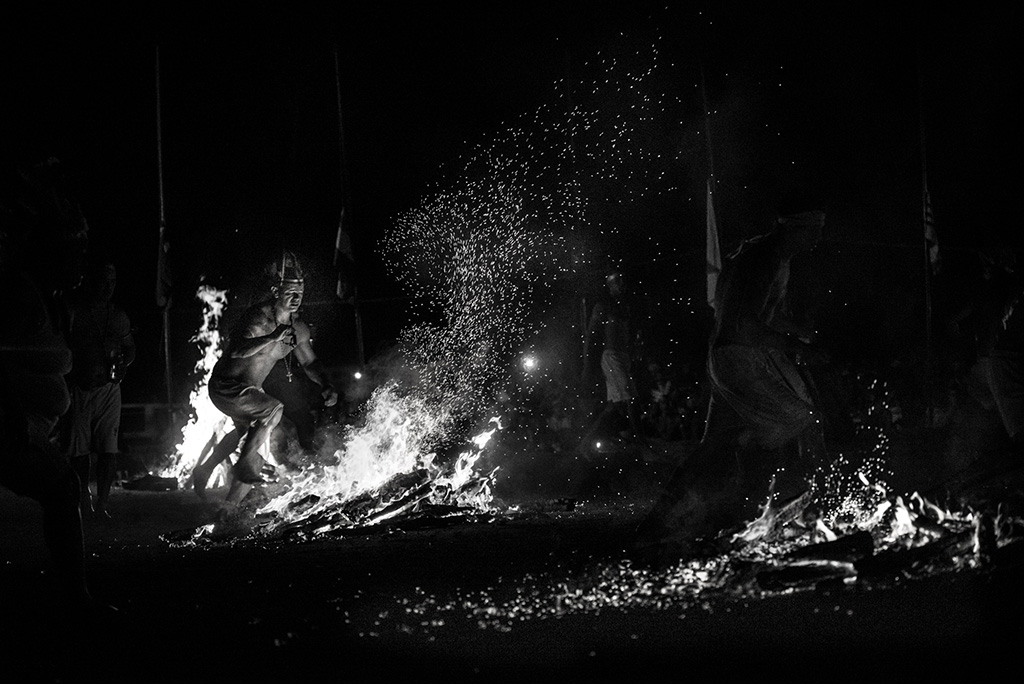 A medium channeling a spirt dances through fire to show his devotion to the goddess Maria Lionza.

Searching for a cure in Venezuela

Despite being the country with the largest known oil reserves on the planet, this year the International Monetary Fund ranked Venezuela as the world’s worst economy.

With inflation near 100 percent, Venezuela is in an economic crisis -- causing shortages and crippling the state healthcare system.

Posted on the doors of government hospitals are the lists of “No Hay”. There are no cotton swabs. No syringes. No rubbing alcohol. No X-Rays. Many medicines and medical goods like heart stints and prosthetics are extremely difficult to find. Doctors report that their patients are dying, because they do not have the supplies needed to save their lives.

Patients with financial resources travel outside of the country, but government currency controls restrict the great majority of the population from being able to seek hospital care abroad. Those left turn to alternative means of care.

One alternative is to go to Sorte, a sacred mountain where followers of the religious cult, Maria Lionza believe that their goddess and saints have healing powers. In the lush green of the forest, through a cloud of tobacco smoke, they channel spirits, bathe in the sacred river and some even walk through fire, in search of their cure.

Meridith Kohut (EE.UU., 1983) An American photojournalist based in Caracas, Venezuela, where she has worked covering Latin America for the foreign press since 2007. A regular contributor to The New York Times, Kohut has produced in-depth photo essays about Hugo Chávez’s socialist revolution in Venezuela, the drug trade in Bolivia, Cuba's transition, gang violence in El Salvador, refugee and migration issues in Central America, labor rights in Haiti, prostitution in Colombia, and prison overcrowding in El Salvador & Venezuela, among others.